Start a Wiki
"A Broom of One's Own"
Cyberchase episode
Season 4, episode 9 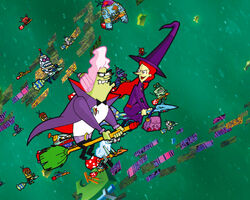 Original air date
October 6, 2005
Directed by
Larry Jacobs
Written by
Ronnie Krauss
George Arthur Bloom
Kristin Laskas Martin
Topic
Unknown
Previous
"A Crinkle in Time"
Next
"A Tikiville Turkey Day"
"A Broom of One's Own" is the ninth episode of Season 4 of Cyberchase. It originally aired on October 6, 2005.

When Wicked puts a CyberSquad Seal of Approval on her new “Wickedy Brooms,” it’s up to Matt, Jackie, Inez and Digit to make sure the brooms are as good as Wicked claims. They try them out, figuring out their speed – how far the different brooms go in a given amount of time. The brooms pass the test – but Wicked doesn’t. They must race to Control Central and save Motherboard before Wicked’s scheme succeeds! And where’s Hacker? And what will he do when he finds out Wicked is trying to take over his turf?

PBS KIDS - Cyberchase Videos - A Broom of One's Own

Retrieved from "https://cyberchase.fandom.com/wiki/A_Broom_of_One%27s_Own?oldid=23255"
Community content is available under CC-BY-SA unless otherwise noted.