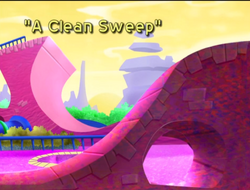 "A Clean Sweep" is the second episode of Season 5 of Cyberchase. It originally aired on November 27, 2006.

Hacker makes Buzz’s dream come true and gives him his very own donut shop in Radopolis. But it’s just part of Hacker’s latest scheme. Working out of the donut shop, Hacker makes confetti out of magnetite, and uses it to put all the Radsters to sleep, so he can take over the cybersite. The kids must engineer a huge “confetti cleaner” to save the Radsters, and encounter problem after problem with their invention. Has the CyberSquad finally found something they cannot do?