A Crinkle In Time 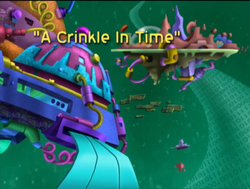 "A Crinkle In Time" is the eighth episode of the Season 4 of Cyberchase. It originally aired on October 5, 2005. The title is a reference to A Wrinkle in Time.

The episode opens with the CyberSquad being chased by the Grim Wreaker. Hacker traps the CyberSquad's pod within a laser net, but Digit activates a laser of his own to cut the pod free. A loose piece of the laser net makes contact with the Grim Wreaker, critically damaging the ship and forcing it to land for repairs. Hacker settles for an inferior loaned spaceship and confronts Slider in Radopolis, kidnapping him.

Motherboard informs the CyberSquad of Slider's kidnapping and claims that he is within Tick Tockia, which must be entered through "a crinkle in time" before eight o'clock. Digit follows Motherboard’s directions, piloting a spaceship to Clock Rock, the gateway to Tick Tockia. Digit crashes the pod into a gear attached to Clock Rock, dismantling it from the clock’s wall and preventing the Earth kids from reaching the gate. They learn how to make the gears mesh again, and reaching the gate by riding the handles attached to the gears. As Clock Rock strikes eight, a giant cuckoo bird emerges from the gate and pulls them inside.

With Slider actually help captive within his spaceship, Hacker gloats from a distance. He declares the CyberSquad gone forever if they don't return by nine o'clock.