Start a Wiki
"A Fraction of a Chance"
Cyberchase episode
Season 5, episode 10 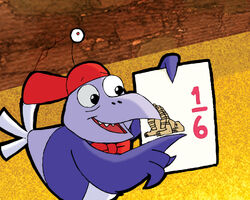 "A Fraction of a Chance" is the tenth and final episode of Season 5 of Cyberchase. It originally aired on September 3, 2007.

When Matt, Jackie and Inez get stuck in the vortex of a cyberportal, it’s up to Digit to rescue them. He just needs to find the U.V.O. – the Universal Vortex Opener. But all the portals are jammed, so how’s he supposed to travel anywhere?  Assistance comes from a surprising source – Wicked!  Digit and Wicked must work together to solve the puzzling clues that will reveal the location of the U.V.O.  But they have to hurry – if the kids aren’t rescued soon, they’ll dematerialize! Can Digit and Wicked find the U.V.O in time?  And is there even a fraction of truth to Wicked’s claim she only wants to help out?

PBS KIDS - Cyberchase Videos - A Fraction of a Chance

Retrieved from "https://cyberchase.fandom.com/wiki/A_Fraction_of_a_Chance?oldid=20359"
Community content is available under CC-BY-SA unless otherwise noted.