A Piece of the Action 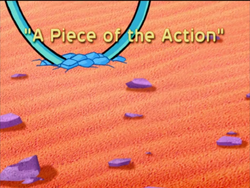 Original air date
May 6, 2004
Directed by
Larry Jacobs
Written by
Adam Rudman
George Arthur Bloom
Kristin Laskas Martin
Topic
Percentages
Previous
"A World Without Zero"
Next
"The Creech Who Would Be Crowned"

"A Piece of the Action" is the fourth episode of Season 3 of Cyberchase. It originally aired on May 6, 2004.

Digit disappears while visiting his friends the Scritters, so Motherboard sends Matt, Jackie, and Inez to investigate. They discover that Hacker has found a supply of Magnetite and will use it to fill up a rocket capable of erasing all of Motherboard’s memory disks. Can the kids stop Hacker before he collects one hundred percent of the Magnetite he needs to launch the rocket, or will Motherboard be shut down once and for all?

Matt: And the award for Best Dramatic Outburst of the Day goes to… Jackie.

"A Piece of the Action" Title Card

PBS KIDS - Cyberchase Videos - A Piece of the Action

Community content is available under CC-BY-SA unless otherwise noted.