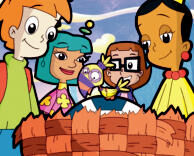 "A Tikiville Turkey Day" is the tenth and final episode of Season 4 of Cyberchase. It originally aired on October 7, 2005.

Hacker steals the legendary Egg of Benedicta – and the lush landscape of Tikiville wilts and turns brown.  The spirit of the Tikians is crushed and Creech is in big trouble unless the CyberSquad can help! When their attempt to recover the Egg from Hacker fails, they hatch a new plan to replace the Egg. By studying patterns in nature, can they recreate the nest and restore peace and harmony to Tikiville?