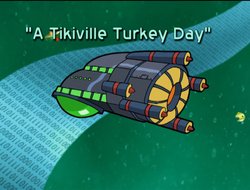 Original air date
October 7, 2005
Directed by
Larry Jacobs
Written by
Louise Gikow
George Arthur Bloom
Kristin Laskas Martin
Topic
Unknown
Previous
"A Broom of One's Own"
Next
"The Halloween Howl"
A Tikiville Turkey Day is the tenth and final episode of the fourth season of Cyberchase. It originally aired on October 7, 2005.

Hacker steals the legendary Egg of Benedicta – and the lush landscape of Tikiville wilts and turns brown.  The spirit of the Tikians is crushed and Creech is in big trouble unless the CyberSquad can help! When their attempt to recover the Egg from Hacker fails, they hatch a new plan to replace the Egg. By studying patterns in nature, can they recreate the nest and restore peace and harmony to Tikiville?

Retrieved from "https://cyberchase.fandom.com/wiki/A_Tikiville_Turkey_Day?oldid=23258"
Community content is available under CC-BY-SA unless otherwise noted.