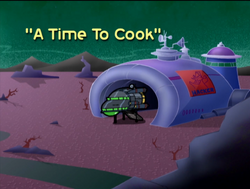 "A Time to Cook" is the thirteenth episode of the second season of Cyberchase. It originally aired on September 18, 2003.

Hacker finds the part he needs to fix his Magnetic Magnotube — a machine that would disable Motherboard forever — in a most unlikely place. All he has to do to get it is win a cooking contest on the hit Cyberspace TV show, THE FEARLESS CHEF. Hacker’s plan? To kidnap his competition. But the CyberSquad is on to him. The girls go on a rescue mission to save the Fearless Chef, while Matt and Digit take on Hacker. Digit is already a celebrity chef, so this should be a piece of cake. They must race the clock and Hacker to cook three delicious dishes in three outrageous locations. Will Digit beat Hacker? Only time will tell.

Retrieved from "https://cyberchase.fandom.com/wiki/A_Time_to_Cook?oldid=23361"
Community content is available under CC-BY-SA unless otherwise noted.