A Whale of a Tale 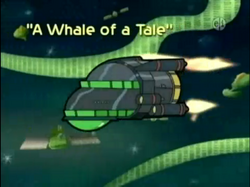 A trip to R-Fair City nearly turns into a monster mash when Hacker abducts Glowla, a beautiful cyberlady who generates pure energy. Hacker is able to snatch Glowla by reprogramming her trick whale, Spout. As a result, Spout goes on a rampage. Digit and the kids must find Glowla and stop Spout before he totally destroys R-Fair City.

PBS KIDS - Cyberchase Videos - A Whale of a Tale