A World Without Zero 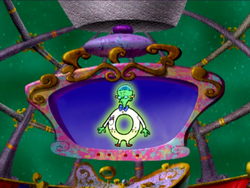 Original air date
May 5, 2004
Directed by
Larry Jacobs
Written by
Barry Harman
George Arthur Bloom
Kristin Laskas Martin
Topic
Zero
Previous
The Borg of the Ring
Next
A Piece of the Action

"A World Without Zero" is the third episode of Season 3 of Cyberchase. It originally aired on May 5, 2004.

Why does glamorous Gollywood go ga-ga when a nobody like Mister Z skips town? It’s a fiendish Hacker scheme, of course. Because of a poison pen campaign devised by Hacker, Mister Z feels worthless and unwanted.  He decides to leave Gollywood, taking his zeroes with him.  The sudden disappearance of the number zero causes confusion and chaos, exactly as Hacker planned.  As Hacker becomes the biggest star in Gollywood, the kids and Digit must show Mister Z he does indeed have a value by demonstrating the importance of the number zero.

Hacker: I asked for a decorator?

Digit: Look at this place. Dull, dull, and duller.

Hacker: It's a bank, what do you expect?!

Digit: To stay on top in Gollywood, you need hip—[tosses a desk ornament aside, snaps]—now, new!

Digit: [without accent] Nothin', what's new with you?

Hacker: Hm, I suppose I could use a lounge chair.