All the Right Angles 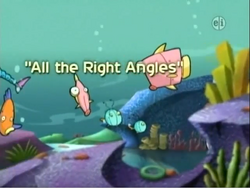 All the Right Angles is the fifth episode of the second season of Cyberchase. It originally aired on April 3, 2003.

Motherboard mistakenly sends a treasure map to Hacker. The treasure is the secret to the legendary cyber-pirate Ivanka the Invincible’s invincibility. If Hacker finds it, Cyberspace is doomed! To help Motherboard, the kids must find the secret treasure before Hacker does, and use their skill with angles to read the strange map that contains only riddles about twists and turns.

Jackie, after being criticized for her bug art in "Find Those Gleamers," has taken up drawing as a hobby, making a comic about herself as a pirate, called Jumpin' Jax. Meanwhile, Digit is on an undercover mission for Motherboard, going to Hacker pretending to have reverted to the dark side. He finds out that Hacker is seeking the key to invincibility, which the pirate ghost Ivanka has and used to keep her spirit in the mortal realms. Fortunately, the kids are called to beat Hacker to it, and they go on a treasure hunt for the key, using a piece of parchment with a riddle on it. Then, Hacker finds out Digit's true goal, forcing him to walk the plank. However, he is stopped and scared away by Ivanka. When the kids dig up the chest holding the key, they find the book to invincibility has left the key blank, so that no one else could become invincible.