"And They Counted Happily Ever After"
Cyberchase episode
Season 1, episode 8 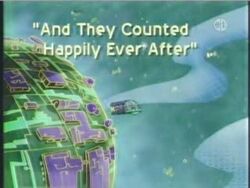 "And They Counted Happily Ever After" is the eighth episode of Season 1 of Cyberchase. It originally aired on January 30, 2002.

Hacker kidnaps the King of this fractured fairy tale world, and demands a ransom of golden eggs. The Wicked Witch then casts a spell, taking away everyone’s ability to count and making it impossible for the fairy tale folk to gather the required large number of eggs. With the safety of the King at stake, the kids must help the fairy tale folk understand the role of place value in our number system before time runs out!

PBS KIDS - Cyberchase Videos - And They Counted Happily Ever After

Retrieved from "https://cyberchase.fandom.com/wiki/And_They_Counted_Happily_Ever_After?oldid=23301"
Community content is available under CC-BY-SA unless otherwise noted.