"Back to Canalia's Future" is the tenth episode of Season 11 of Cyberchase.

The Cybersquad and Pearl time travel a decade into the past, and it turned out that Pearl was right. Their plan was to convince the citizens to conserve water in an assembly. As they leave for the assembly, Hacker has been spying on them with Buzz and Delete. He had been spying on Pearl and knew she had a time machine. He planned on taking Pearl's time machine to travel to when he worked for Motherboard, alter the past, and become ruler of Cyberspace.

The citizens crowd at Pearl's basement. To Pearl's dismay, her time machine had been stolen and replaced by a cardboard decoy. Now the citizens of Canalia and Pearl's father don't believe her. It turns out that Hacker stole the time machine.

Hacker tests the time machine and tries to remember when he worked for Motherboard. Buzz and Delete get the date wrong twice, and Hacker decides to take the time machine to the Grim Wreaker. Time passes, and Pearl is crestfallen over her failed attempt to convince the citizens and her lost time machine.

As Inez comforts Pearl, she notices Hacker and his henchmen passing by in a gondola. The Cybersquad pursues them and manages to recover Pearl's time machine. Pearl takes her father and the Cybersquad to the future, where Canalia has run out of water. Pearl's father finally believes Pearl and convinces the citizens to conserve water. 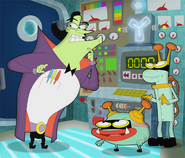