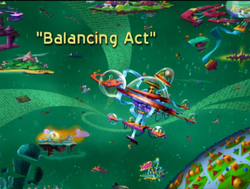 "Balancing Act" is the first episode of Season 4 of Cyberchase. It originally aired on April 15, 2005, during the Cyberchase: Know Your Dough Marathon[1][2].

In the marathon, Harry introduces it as "The Balancing Act", with his voice overlapping the title card[3]. Later airings lack this.

Shari Spotter is selected by Headmaster Stumblesnore to make a film about Frogsnorts. Matt is the director, Inez and Jackie the writers, and Digit is the camerabird. The team collaborates well until they realize they're spending too much too fast. The solution: create a budget. Their efforts are complicated by The Hacker, who places Stumblesnore under a spell in an effort to become the new headmaster of Frogsnorts.

Exterior of the Chamber of Trolls