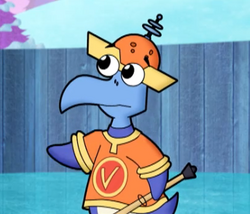 Bernie plays penguin hockey and is a member of the Voyagers. He is friends with Fluff.[1] He debuted in Face-Off.

Bernie cares about his friends, but he can be gullible. When Ice showed the hockey team the new Cyberblades ice skates, he wanted a pair immediately. He is also susceptible to peer pressure and herd mentality, especially when trying to convince Fluff to buy the new Cyberskates because "everyone else is getting them."

Bernie is light blue with a stout beak.