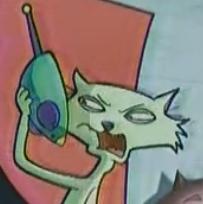 Binky is a female cybercat who controls a pyramid in the Tomb of Rom. She made her first debut in "Clock Like an Egyptian". She is voiced by Bebe Neuwirth.

Binky has light green fur with yellow fur around her stomach. She has brown eyes and a black nose.

She guards the Eye of Rom, a powerful item that can grant the request of its user. In the episode, "The Eye of Rom", it is shown that if the Eye of Rom is not in its place when the pyramid's shadow reaches the Nile, the pyramid will be destroyed.

She has been proven to be an ally to the Cybersquad. In "Clock Like an Egyptian", she stopped Hacker from escaping with the Encryptor Chip.

To Hacker, she is a nuisance. In "Clock Like an Egyptian", she stopped him from escaping with the Encryptor Chip by creating an artificial sandstorm from her pyramid.

Binky and Mummsy have a mutual relationship in protecting the Eye of Rom. 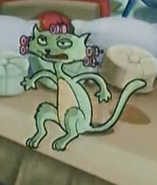