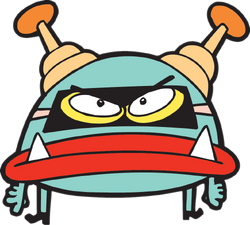 Buzz is one of the two secondary antagonists of Cyberchase. Along with his best friend, Delete, he works as one of Hacker's henchmen.

Buzz was usually voiced by Len Carlson through "EcoHaven Ooze", but occasionally by Erik Buchanan. After Carlson's passing on January 26, 2006, Philip Williams took on the role of Buzz.

As of "A Garden is Born", Buzz's favorite number is five.

"A Day at the Spa" suggests that Buzz and Delete used to work at a cybercheese factory before being hired by Hacker, or at least instead of working for him for some period of time. Both seem weary of the prospect of returning to the factory for work, although they don't particularly enjoy working for Hacker.

Buzz loves donuts, and aspires to run his own donut shop. Out of the two henchmen, Buzz is the more serious minded and goal orientated. He usually gives Delete orders as well though they are prone to arguments among themselves, much to Hacker's annoyance. Although generally more intelligent than Delete, he occasionally has trouble understanding Hacker's plans.

Buzz is generally loyal to his boss despite the disrespect he receives, but he seems to have aspirations to overthrow or at least overtake Hacker, and is only lacking in means. In "Double Trouble", when Buzz gets ahold of the golden droplet, he suggests to Delete that they are rich enough not to need Hacker. When Hacker loses his memory in "Raising the Bar", Buzz tricks him into thinking he is Buzz's henchman. In "Blowin' in the Wind", Buzz begins to think that by finding Hacker's book of secrets, he and Delete could rule Cyberspace themselves.

Buzz is short and round in stature. His metal skin is turquoise, and he has large red lips that form an underbite with two pointed teeth jutting out on either side. His antenna are similar to Delete's, but have two additional rings at the base.

A rectangular area around Buzz's eyes is colored black, and a narrow pink band connects the sides around the back of his head. The way Buzz is drawn while on vacation in "EcoHaven CSE" suggests that this is a mask, substantiated by how a sock is hung between the band and his head in a more recent episode[citation needed]. "EcoHaven CSE" also shows that Buzz's black shoes can be removed, but his feet are still small and undetailed.

Buzz's hands are shown[citation needed] to be able to stretch somewhat to interact with objects, but to a far less extent than Delete's arms.

In "Harriet Hippo & the Mean Green", Buzz does a perfect impression of Hacker, complete with a dramatic echo. Delete seems surprised by this, and it unintentionally fools the CyberSquad. This instance could suggest that Buzz has vocal mimicry abilities similar to Digit's.

Buzz considers Delete his best friend. They frequently refer to each other as "Buzzy" and "Dee-Dee". Delete will often take orders from Buzz, but is also prone to engaging in arguments with him and even physical fights. Buzz is sometimes annoyed by Delete's tendency to be distracted during their duties, as he takes them more seriously. Delete tends to be the more loyal one to the friendship, as Buzz will occasionally throw him under the bus when he has the chance[5].

Unlike Delete, Buzz demonstrates no particular fondness for Digit. In "All the Right Angles", he is mistrustful of Digit claiming to be back on Hacker's side.

Although originally having a neutral opinion of Gigabyte, Buzz grows jealous of him once Delete begins to give the monster special treatment. In "A Perfect Fit", Buzz is reckless in handling Gigabyte to spite Delete, and is ultimately the one who flings Gigabyte off of the Giant Pyramid of Petaluma.

Although Hacker does not seem to particularly like either of his henchmen, he seems to regard Buzz more warmly. In situations where only one of Hacker's henchmen accompanies him, it is usually Buzz[6][7]. Hacker also tends to praise Buzz more often. This is all in spite of the disloyalty Buzz has shown when he thinks he's gained an advantage.

Buzz and Delete: one dingbat and one ding-dong- together they equal double trouble! They're Hacker's fumbling henchmen who always show up at the wrong time, creating chaos and confusion.

Age: Buzz is older than Delete

Great At: Messing up Hacker's plans

One of Hacker's henchman. He's a short, round robot. Big on scheming, short on brains. Best friend to Delete. Loves donuts.

Buzz works for Hacker because it’s his job. He does enjoy his work– cheating and scheming are two of Buzz’s favorite activities. He’s a crusty, cranky robot with a soft spot for donuts; he never met one he didn’t like. But Buzz is not really very good at his job. Unless Hacker tells him exactly what to do, things are likely to go very wrong. Buzz would hate to admit it, but work would be a lot less fun if his pal Delete – a.k..a. “Dee-Dee” – wasn’t around.

Buzz, a bumbling “bot,” is too afraid of Hacker to go against him. He says “yes, Boss,” then gives his pal Delete the job, but they almost always mess things up. Buzz loves donuts and calls his pal "Dee Dee." Signature line: “Uh oh, the boss isn’t going to like this.” 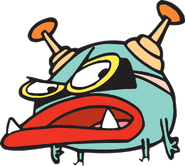 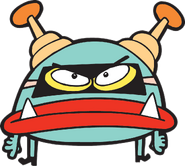 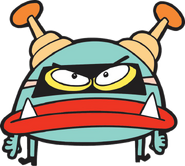 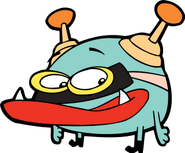 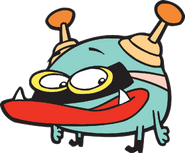 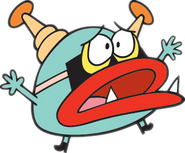 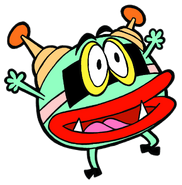 Buzz, Hacker, and Delete (from left to right)

Buzz, Delete, and Hacker in a ship 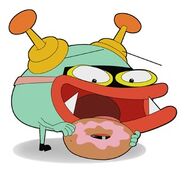 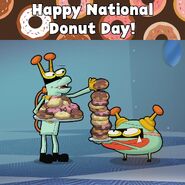