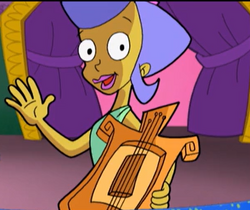 Calliope is a member of The Spheres that plays the lyre. She debuts in the episode "Out of Sync".

Calliope has yellowish-tan skin and light purple hair with a gold and pink hair piece holding part of her hair in a bun. She wears light blue eye shadow, pink lipstick, a light blue sleeveless dress with a pink and gold belt, and purple sandals. She also wears a pink spiraling armlet on her right arm and a pink armlet cuff on her left

She is one of the members of a band called The Spheres who hold multiple concerts every day to maintain the balance of Mount Olympus. Her role in the band is to play the lyre every second beat in a four-beat measure. She lives in Mount Olympus.

She lives up to her title of being a muse[1] [2]by being shown as being a skillful musician of the lyre and in having abstract thoughts about nature and art.

Calliope tends to be self-centered like her band mates. In "Out of Sync", before a performance, they discussed what made their band popular (referring to themselves). Calliope mentions during the discussion about how "If not for the poetic inspiration that burns within my tortured soul, our band would be, like, a mere nothing."

Sometimes she is condescending as shown in her rebuttal in an argument over who was the person who played the instrument best. "No, children. Our group would be nothing without the intense spirituality I bring to my lyre."

She is also shown to be aloof and at peace with herself. In "Out of Sync", she kept calm while meditating even after being informed of Mount Olympus possibly being destroyed at sunset.

Calliope likes to play her lyre. Before and after performances, she practices meditation. She likes to promote being in sync with nature and one's surroundings.

She is a member of The Spheres, and they've known each other for eons. Her relationship with the other members is collaborative and generally friendly despite the heated debates over who was the main reason for their success. She was shown to be dismissive of Beast and his role in the band, but after realizing his importance to the group, she reconciled for their actions by kissing him on the cheek after he returned and helped restore Mount Olympus.

Calliope meditates before a performance

Calliope kisses Beast on the cheek