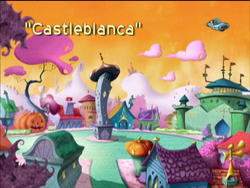 "Castleblanca" is the second episode of Season 1 of Cyberchase. It originally aired on January 22, 2002.

Dr. Marbles is captured by Hacker and taken to Castleblanca, a Cyberspace version of Transylvania. Hacker’s goal: transfer Marbles’ brain power into his newly built robot named Megabyte! Summoned by Motherboard, the kids and Digit arrive with the knowledge that Hacker has taken Marbles to a castle, but which one? There are hundreds and hundreds of castles. To find Marbles, the kids must master the art of properly collecting data, organizing it and graphing the results — results that are sometimes surprising!