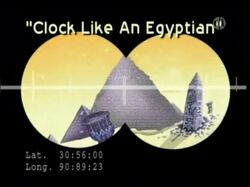 "Clock Like An Egyptian" is the ninth episode of Season 1 of Cyberchase. It originally aired on January 31, 2002. The title is a reference to the song "Walk Like an Egyptian".

Dr. Marbles finds the Encryptor Chip, which he needs to delete Motherboard’s virus, in an ancient pyramid. But the Mummy who guards the pyramid finds Marbles. When the kids and Digit arrive, they must work their way through the chambers of the pyramid, find Dr. Marbles, and escape before a trap set by the Mummy seals them inside forever. How much time do they have? Unfortunately, they have no clock or watch to tell them how much time has gone by. Is the mission impossible? Not for the CyberSquad!