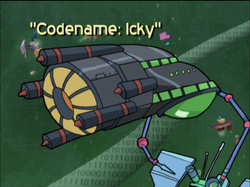 "Codename: Icky" is the 16th episode of the first season of Cyberchase. It originally aired on February 11, 2002.

In the watery depths of cybersite Aquari-yum, the kids and Hacker go in search of a giant cyber-slug, who feeds on pure energy. The kids and Digit travel underwater in two separate vessels, but Hacker has a listening device that taps into their communications system, allowing him to overhear their plans and track every move they make. The kids outsmart Hacker by devising a series of codes so they can send messages back and forth in secret — even though Hacker can hear what they’re saying. Hacker surprises everyone by perfectly understanding and taunting Matt in Pig Latin by saying "Iyay'llay oday oremay anthay arescay youyay ifyay youyay ytray otay opstay emay" ("I'll do more than scare you if you try to stop me") revealing that he knows Pig Latin. The kids first try a code that uses word numbers, line numbers, and page numbers from Digit's cookbook (which wasn't exactly a best seller) but like Pig Latin, Hacker is able to understand them, so they device a new code that uses photos and postcards from Digit's album that have been labeled with numbers that the kids radio and decode by turning the number-sides to reveal the message. But unless the kids can reach the slug first, Hacker will use the slug to attack Motherboard’s circuitry and disable her once and for all!