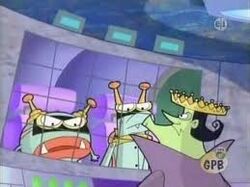 "Cool It" is the 14th episode of the first season of Cyberchase. It originally aired on February 7, 2002.

Determined to destroy Motherboard in any way possible, Hacker cleverly clogs up her cooling system. Digit brings the kids into Cyberspace to help fix her, but the special coolant Motherboard needs, cryoxide, is found only in Castleblanca, and the supply is closely monitored! To bring back exactly enough cryoxide for Motherboard, the kids have to figure out the exact volume of Motherboard’s tank. In the process, they discover the importance of a standard unit of measure and fill a most unusual container with the precious cryoxide.