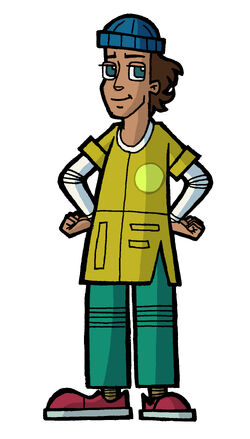 According to him and his journal entry, he and Hacker used to be friends and together they created blueprints for a machine that could change one's very being. But Hacker wanted to use it to take over Motherboard. Coop ended up tearing up the blueprint and hiding the NIC card in a picture frame that contained a picture of him and Slider to protect it from Hacker.

Coop didn't count on the Hacker's revenge, though. He switched Coop's helmet with one made out of magnetite. The result was him aging with gray hair and going into hiding. Coop found a cure for his effect, but can't make it because one of the ingredients was magnetite itself.

Slider and the Cybersquad found his location. At first, Slider wasn't able to recognize him through his age. But when Coop gave him the secret handshake they know, Slider realized he found his dad.

In "A Clean Sweep," Coop is seen fixing a skateboard near a ramp in Radopolis Stadium. Later he is inroduced by King Dudicus to a large crowd. He is shown to be unveiling the skateboard he was working on as the 'Scorcher'. When Hacker dumps the magnetite, Coop is buried with everyone else. Slider mentions that he must go back to the stadium to save his dad. Coop is seen one last time when the Cybersquad removes all the magnetite.

He is not seen or mentioned again.

Whenever Coop is seen or mentioned, he appears to be very smart. Some examples include:

Coop is only seen three times. All three times, he is wearing the same thing: a lime green shirt over a white longsleeved shirt, teal jeans, and maroon sneakers.

Add a photo to this gallery
Retrieved from "https://cyberchase.fandom.com/wiki/Coop?oldid=26459"
Community content is available under CC-BY-SA unless otherwise noted.