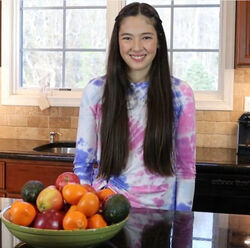 Courtney Chu is an American-Chinese actress that plays in the segment, Cyberchase For Real,” She has a job as a citizen scientist, She is 15 years old, She has a friend named Violet Tinnirello and her uncle is Harry.

Courtney Chu is a real character that has black hair, brown eyes, tan skin and is 15 years old.

Retrieved from "https://cyberchase.fandom.com/wiki/Courtney_Chu?oldid=26572"
Community content is available under CC-BY-SA unless otherwise noted.