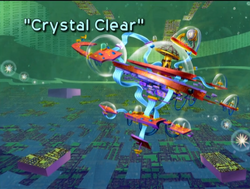 Flashback of Matt and his mother growing a salt crystal
Community content is available under CC-BY-SA unless otherwise noted.
Advertisement