The CyberSquad is a collective term to refer to the characters that travel around to protect Cyberspace and Motherboard from harm's way, namely from Hacker and co. and they are protectors of Cyberspace.

The members of the CyberSquad are as follows. "How It All Started: Webisode 3" and "Lost My Marbles" establish that none of the four know each other before the events of the series, suggesting that the formation of the CyberSquad was the ultimate cause of their friendship.

Other members may include Slider, Creech, and Widget due to their connections and their status as recurring characters, though them not being constant characters makes them not be part of the main CyberSquad. Technically, anyone in Motherboard's alliance, especially if they are a kid helping in the adventures, is part of the CyberSquad, as revealed in "The Hacker's Challenge". However, only the four major members are constantly involved in the adventures and have Skwak Pads, which mark their status. 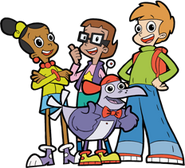 Jackie, Inez, and Matt (from left to right), and Digit (in front) 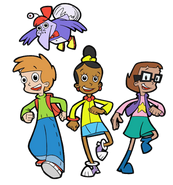 Facing off against Hacker, Buzz, and Delete

On the Cyberchase logo

The three Earth children facing off against Hacker, Buzz, and Delete

Partying with Motherboard at Control Central

Jackie, Matt, and Inez, in their winter attire