Not to be confused with Cyberspace.

For general coverage, Wikipedia has an article on Cyberchase.

Cyberchase has aired since 2002 on PBS Kids and been produced by Canada-based animation studio Nelvana and Thirteen/WNET New York. Running for over 20 years, it is the second-longest currently running PBS Kids series after Sesame Street (before it moved to WBD's HBO), and was formerly third to Arthur (1996–2022). It is also the central component of the Cyberchase brand.

The main plot centers on three Earth children, Inez, Jackie, and Matt, and their robotic cybird friend Digit, in their quest to protect Cyberspace and its ruler Motherboard. This usually involves developing and applying a STEM concept under time pressure to thwart the villainous Hacker's plans. After each episode is Cyberchase For Real, a live-action segment that demonstrates the same topic in a more practical context. The show's website, Cyberchase Online, hosts interactive and supplementary materials such as games and activities.

Cyberchase's learning goals are to demonstrate the usefulness and universality of math, foster enthusiasm and confidence for the subject, and help improve problem-solving skills. The show's content is designed to reflect national curriculum standards and has been vetted by formative and summative research.[1]

Dr. Marbles, Motherboard's chief technician[2], created Hacker as an assistant, who in turn created Digit. Hacker grew jaded and greedy, and began plotting to take over Cyberspace. He intended to use the Transformatron to defeat Motherboard, but Coop, its co-creator, destroyed the blueprints and hid the components. In retaliation, Hacker corrupted Coop with magnetite. When Hacker was caught removing Motherboard's Encryptor Chip, Dr. Marbles drained his battery and Motherboard banished him to the Northern Frontier.

Hacker brought Digit and had him construct the Grim Wreaker, fitted with a Recharger Chair. Hacker used the ship to blackout several cybersites, but Digit rebelled, restoring the power and escaping Hacker's banishment. Hacker later created Buzz and Delete as his new henchmen.

Some time later at the start of the series, Hacker has found a way to create a breach in Cyberspace near Motherboard Control Central, by having Inez, Jackie, and Matt touch a real-world library computer map at the same time. This lets Hacker send Motherboard a virus while she is undergoing an upgrade and has her firewall down. Motherboard suffers partial damage, and her Encryptor Chip is destroyed. She summons the Earth children to Cyberspace, and they team up with Digit to undo Hacker's damage, forming the CyberSquad.[2]

Hacker creates many schemes to usurp Motherboard or specific cybersites, which the CyberSquad almost always foils. Both are in search of Professor Archimedes' new Encryptor Chip, which can be used to cure Motherboard's virus. Wicked becomes a secondary antagonist who has feelings for Hacker at first[3], but they prove unable to get along and eventually become rivals.

Hacker sets his sights on the components of the Transformatron to rebuild it. The CyberSquad finds Coop, but Hacker follows them and seizes the final component, the Network Interface Card. However, powering off the Transformatron undoes its effects. Though Hacker persists at rebuilding the machine, the CyberSquad permanently disposes of the Network Interface Card, thwarting his plans.

Though Hacker continues scheming, his constant defeats sink his reputation and evil image[7]. A new villain, Ledge, nearly takes over Sensible Flats and defeats the CyberSquad, but Inez turns off Ledge's machine at the last second, leading Hacker to reject him. Ledge proves himself an antagonist to the CyberSquad and Hacker alike, pushing the rivals to cooperate more often, to their chagrin.

The National Science Foundation's Division Of Research On Learning awarded WNET a grant to develop Cyberchase, starting on August 15, 1996. From the beginning, it was envisioned as a "television-based", "multi-component project", with a half-hour series following a "multi-ethnic group of friends", supplementary material online and in print, and learning goals designed to give nine- to eleven-year-olds enthusiasm and involvement with math. The original series concept involved an eponymous in-universe computer game that cast members would be pulled into, with a host character who would provide the challenges to complete to progress onto the next adventure.[8][9]

Curious Pictures made concept designs for the characters starting in late 1997[citation needed].

Production and evaluation of the pilot phase started on January 1, 1998. By this point, the concept of an in-universe Cyberchase computer game is replaced by a more familiar mention of an "evil adversary". It is possible that with this change in plot, the first abstract's host was reworked into the character of Motherboard, with the challenges becoming her missions. The abstract mentions varied locations such as "a contemporary theme park" and "the deserts of ancient Egypt", fitting the final show's R-Fair City and Pyramidia, respectively. The show was also planned to encourage viewers to use math to solve a cliffhanger at the end of each episode. The abstract still describes ancillary material as an interactive website and "print materials including a magazine with activities, puzzles, problems, and comics."[10]

By October 16, 1998, a formative evaluation was carried out to assess the main 2D-animated characters, two potential storylines for episodes, and the website concept; as well as to explore which television channel would air the series. At this time, the show's target audience was stated as seven- to ten-year-olds. The story concepts were "Poddleville", later expanded into the pilot version of "The Poddleville Case", and "Bridge", where the protagonists had to complete a bridge to reach and transport an elephant. Some characters' names still differed from the final choices, like Buggs (Buzz), Julie (Jackie), and Kyle (Matt). The evaluation involved showing the latest concept character designs. Though most of the characters' designs were tweaked since the evaluation, Hacker had two early designs, both with some elements of his eventual final design but with wildly differing heads.[11]

The pilot version of "The Poddleville Case" was test-screened in select schools around May 1999. This was accompanied by a description of the series' plot, including Hacker's backstory, the virus he gives to Motherboard, and the selection of Inez, Jackie, and Matt to help defeat Hacker: all familiar elements to the final series.[12]

The pilot was later publicly test-screened on Twin Cities Public Television[13] (potentially around September 1999, judging by the date on Gino Patti's VHS copy[14]). Meanwhile, an early Cyberchase website was launched[15][16], as was shown in the pilot's demo video[17].

Canada-based Nelvana took charge of production, instead of Curious Pictures continuing to produce the series. Work began on "Lost My Marbles" and "Snow Day to be Exact". While both episodes underwent revisions since February 2000, Digit had been added at this point in production.[18] "The Poddleville Case" was redubbed and edited in stages[citation needed] for better consistency with the final show. Storyboards for the first three episodes were test-screened in schools[citation needed].

On February 15, 2000, Nelvana received funding for the development of 25 new episodes. The abstract's description of the series itself was largely consistent with what had been revealed thus far. Its target audience had been revised again to eight- to eleven-year-olds, which was used at least through December 2001[19]. New outreach plans included a Weekly Reader insert, a teacher's guide for using the series in the classroom, and activities in after-school and weekend programs.[20]

By June 2001, around 14 episodes had been finished[20]. "Castleblanca" was in the final stages of storyboarding, and was being publicly evaluated in the form of a leica reel[22].

Cyberchase Online launched in December 2001, with Web Adventures webisodes leading up to the series premiere on January 21, 2002. Meanwhile, five episodes were shown early in classrooms in the San Francisco Bay Area for another study[19].

After Season 5, production changed hands to Thirteen in association with Title Entertainment, Inc. and WNET.ORG, with PiP Animation Services Inc. as the animation studio.

Cyberchase uses an art style with mostly 2D-animated characters and props, textured backgrounds, and some 3D elements (such as Motherboard and the vortex). The resulting style is similar to Nelvana's earlier Blaster's Universe. The 2D characters and props are drawn with a thick outer outline, and used to have cel shading. This was replaced with a more subtle, blurred internal drop shadow effect during the switch to rigged animation in Season 6. Background art varies between lined and lineless, especially in earlier seasons.

Cyberchase is rated four out of five stars for ages 5 and up on Common Sense Media.[23]

The show won a CINE Golden Eagle Award in 2006[24], a Daytime Emmy Award in the Outstanding Broadband Program category in 2007, and an Environmental Media Award in 2016[25]. 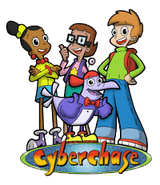 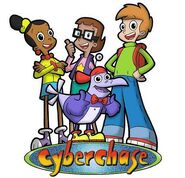 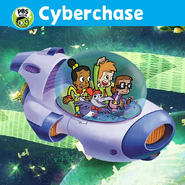 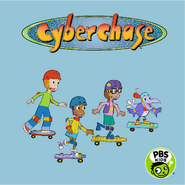