Not to be confused with Cyberchase.

For general coverage, Wikipedia has an article on cyberspace.

Cyberspace is a virtual universe[1] and the physical abstraction of the Internet[2][3] that "exists in the online world of a computer."[4] It is the main setting of Cyberchase.

Cyberspace is described as a place where anyone can go and anything can happen[6][7][8], and is indeed habitable for Earth humans, although, in practice, few entities are shown traveling in or out of it. The human members of the CyberSquad travel between the universes frequently, and there are rare instances of entities native to Cyberspace entering the real world: Digit has been to France[9], and Jackie has brought a Madre Bonita flower home for her mother[10].

Deep Cyberspace is mostly dark green with a raindrop-like texture. The circuitry of Cyberspace doubles as its stars. Binary code appears as aurora-like ribbons and is described as Cyberspace's Milky Way.[4]

The physics of Cyberspace differ from those of the real world. Gravity seems to pull in a constant direction at all times, even in the regions of Cyberspace that are comparable to outer space. Time is entangled with space[6] such that time spent within Cyberspace can be negligible compared to time elapsed in the real world[5]. Magic exists, but its scope seems to be limited to Cyberspace itself[11], and certain forms don't affect those who aren't native to Cyberspace[12]. Cyberspace also contains substances such as magnetite and francesium.

In some ways, Cyberspace functions like a literal computer directory. Certain devices like the Syncolator can search it for requested data[13]. The Emergency Reset Button, when unlocked, allows whoever presses it to reformat Cyberspace in their image[14].

Cyberspace is comprised of at least 1,294[12] distinct cybersites that serve as planets[4], with a population of at least millions[15]. The relative locations and physics between cybersites seem to be inconsistent, and are sometimes stated to move over time[16][17]. Maps of Cyberspace also differ between episodes.

In "True Colors", Sam Vander Rom speculates that "aliens from another cyber galaxy" are responsible for Hacker's irrigation trenches on Eureeka. This implies that the known cybersites are considered to belong to one or multiple cyber galaxies. Relatedly, the Spheres of Fears are classified as a mini-galaxy[18]. The concept is also mentioned in a promotional bumper for "Space Waste Odyssey", with the Star Wars allusion "In a cyber galaxy far, far away".

Motherboard is the potentate and cyberbrain[5] of Cyberspace. She exerts total control over Cyberspace from Motherboard Control Central[13], watching over cybersites and managing diplomatic affairs[6][19], and can bridge physically distant locations, in Cyberspace and the real world alike, with portals.

If Motherboard is defeated in a formal election, the position can be seized, which includes the right to amend the Cyber-Constitution[20]. It isn't known how else the new ruler could control Cyberspace without infringing on Motherboard's civil liberties.

Cyberspace is a word referring to the notional world of information and communication provided by the Internet[21]. In science fiction, it can refer to a three-dimensional representation of virtual space in a computer network[22].

The demonym for Cyberspace may be cybercitizen[4]; Motherboard has also used "citizens of Cyberspace"[8]. In "Fortress of Attitude", Hacker considers "Cyberspacians" (pronounced /ˈsaj.bə(ɹ)ˌspej.ʃənz/), "Cyberspacies" (/-ˌspej.ʃiz/), and "Cyberspots", before concluding "Hm, I'll have to work on that."

Hacker and Wicked want to rename the universe to Hackerspace[23][24] and Wickedspace[23], respectively, upon coming into power. These are portmanteaus of the existing name with each of their own names. The former may also be a pun on makerspaces, which are sometimes referred to as "hackerspaces"[25].

Everything out in the whole wide world – and more – is here in cyberspace, from Ancient Egypt’s Mumsie and Binky, to the zombies and werewolves of Castleblanca. It’s a magnificent, often wacky, off-the-wall, animated world that exists in the online world of a computer. While some of the sites might have their source in the Real World, those who inhabit it and the trappings of the site have a decidedly stylized, computerized, cyberized look. Cyberspace’s circuitry is its stars, binary code is its “Milky Way” and cybersites are its planets. It’s a fabulous dimension full of colorful characters and amazing locations where anything can happen – and often does. 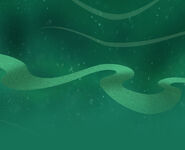 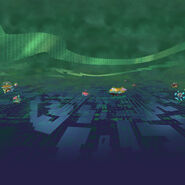 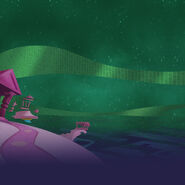 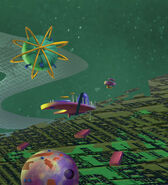