The Deedle Beast (species name unknown), is a domesticated animal that is considered a pet in Cyberspace. The species debuts in the episode, "The Deedle Beast".

The Deedle Beast has purple fur with lighter fur at the face, legs, and feet. They have curly tails.

Facts from 101 Facts About Deedle Beasts

Facts from "The Deedle Beast" 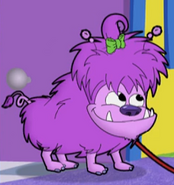 Dewey turns bright orange and sings.
Add a photo to this gallery
Retrieved from "https://cyberchase.fandom.com/wiki/Deedle_Beast?oldid=24396"
Community content is available under CC-BY-SA unless otherwise noted.