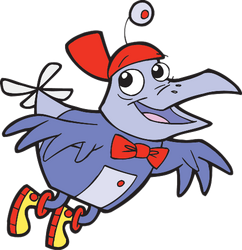 Digit "Didge" LeBoid[3][4] is the deuteragonist of Cyberchase, and one of the four main CyberSquad members, alongside Inez, Jackie, and Matt.

In contrast to the three children from Earth, Digit is a robotic cybird[5] from Cyberspace. He has a propeller tail, chest hatch, and all-purpose beak that come in handy on the CyberSquad's missions.

Digit was created by Hacker, but defected to Motherboard's side prior to the events of the show[6]. Digit is now one of Motherboard's technicians, as well as a chef, cookbook author, and restaurant owner.

construction This article or section is incomplete.
Please add information to improve its coverage and accuracy.
“Digit had turned his back on the bad guys and hooked up with Motherboard, becoming one of her most trusted assistants. He always helped the kids out with their missions. But every now and then, he needed a little help himself.”
―Cyberchase: The Search for the Power Orb, page 27

While working for Motherboard, Hacker created Digit to be his assistant.

Digit seems to have willingly helped Hacker caused chaos at some point. In "Lost My Marbles", he claims, "If Mother B hadn't rescued me and set me straight, I'd still be wreaking havoc". This may have been very early on in his life, as Digit is demonstrated helping Motherboard throughout the "How It All Started" prequel series, and Motherboard is not shown rescuing him.

When Hacker locked Motherboard's Encryptor Chip in a secret vault, Digit solved the combination and returned it in time. Hacker, banished to the Northern Frontier for his actions, brought Digit along against his will, unbeknownst to Motherboard and Dr. Marbles.[7]

Digit thwarted Hacker's plan to cause chaos in Valussa by sending a coded message containing the secret to save the cybersite. Hacker learned of Digit's betrayal and locked him in a cage. Digit used his beak to free himself, and flew back to Motherboard Control Central.[6]

Along with the other members of the CyberSquad, Digit helps protect Cyberspace and Motherboard from Hacker.

Digit attended cooking school[8] and has become a well-known chef, described in "A Time To Cook" as "cyberworld's latest cooking sensation", and in "Face-Off" as "the most famous cyboid in Cyberspace". He owns a restaurant as of "Journey of a Thousand Food Miles". Digit is the author of The Cyber Chef and Cooking with the Didge. Prior to publishing The Cyber Chef, he may have been to France.

Digit is well-intentioned but can be clumsy and awkward. He often serves as a comic relief character[9][10], and has several idiosyncratic catchphrases. Digit can also be worrisome and overbearing at times, but he is typically sweet and mostly comes across solutions to problems by accident, and is quick to accept being called a genius before he knows how what he said or did was useful[9].

In "Digit's B-Day Surprise", Digit is shown to realize that he makes a lot of mistakes. Hacker uses this as a weakness to manipulate him into feeling guilty and unappreciated, but Digit is ultimately comforted by his friends at the titular surprise party.

Digit's Synchrometer keeps him synchronized, and can affect his behavior. If he waits too long to reactivate it, he experiences symptoms such as loss of coordination, unusual speech, disorientation from reality, and memory loss.[11]

In "Codename: Icky" and "Size Me Up", Digit says he hates anchovies and mud, respectively. In "Be Reasonable", he reveals he has a toy cybercoupe collection. As of "Plantasaurus!", Digit's favorite band is Purple 4.

Digit is a predominantly indigo cybird, with a body plan likened to a turkey's in robot form[12]. Digit's head resembles a seagull's[12], and it and the tip of his tail are both lavender. His beak is pointed and about as long as his head is wide[12], with prominent nostrils and wrinkles at the base, and contains three rounded buckteeth at either side. He has bags under his eyes.

Digit's wings can function as hands, and his tail is a small propeller, with four triangular tail feathers[9] that act as blades (although he is usually only drawn with three visible at a time, even from the back). The body of the tail can open to release a parachute[4]. He has a white, rectangular "chest hatch"[13][9] with a small red knob at the top. Digit's height and length in profile are each about three times the width of his head[12].

Digit has spiky hair that is usually obscured by his red, backward-turned baseball cap, which he wears backward. The cap is attached by a thin cord to a "cyber cam"[12], which looks like a white orb with a red dot, much like the Scritters' and Kozlow's hats. The cyber cam sometimes flashes when he realizes something[14]. Digit also wears a red bowtie, and yellow-and-red high-top sneakers[12].

In "A Recipe For Chaos" and "Plantasaurus!" Digit is shown wearing his yellow nightcap, yellow nightgown pajamas with light blue trim, and blue creature slippers.

Digit resembles Eddie from Birdz, another show that Larry Jacobs worked on. However, this may be a coincidence, as Digit had been written into the show by February 2000[15], before Jacobs joined production in September that year[16].

In "Clock Like an Egyptian", Digit claims he has no chance of growing feathers. However, he is sometimes depicted with feathers falling off[17].

Digit's eyes can safely dislocate from their sockets. The back of each eyeball has a small cylindrical knob that tethers the eye to a thin, coiled orange wire, similar to the exposed wires on Widget's body. The area behind each socket is hot pink.[18] It is unknown whether Digit can dislocate his eyes at will, or if it was merely a fear reflex. Gigabyte's eyes seem to be attached in the same way, perhaps because both Digit and Gigabyte were constructed by Hacker.

Digit's avian body plan and propeller tail enable him to fly. However, he is afraid of heights, and the necessary parts for flight tend to be damaged in some situations where they would be useful. For example, in "Penguin Tears", the rotor freezes and becomes inoperable.

Digit can use his chest hatch to store and retrieve things. The objects inside seem to stop exerting physical forces, and may shrink to fit. For instance, when he takes out a strong magnet, it only then attracts several other large objects from inside the hatch[19]. A more extreme example still is when he unloads a weight that is larger than his body, which he struggles to lift afterward and is heavy enough to counteract the pull of the Grim Wreaker on Motherboard Control Central[20].

Digit also has an all purpose beak[6] that he can turn into several tools.

Like a parrot, Digit is skilled at vocal mimicry. He is generally talented at imitations and ventriloquism, and seems to be able to throw his voice.[21] In "Secrets of Symmetria", he claims to be able to imitate DeNiro, Al Pacino, and Tom Cruise.

Digit has built virtual nests, but admits to not being very good at it[24].

The ball attached to Digit's hat can be used as a flashlight[25].

"Spheres of Fears" implies that Digit can whistle, although he is unable to when he tries, likely due to being nervous.

"Codename: Icky"
Although no recipes are shown, passages in the The Cyber Chef mention the hot dog and croissant, so it is possible that the book covers these dishes.

"A Recipe for Chaos"

"Journey of a Thousand Food Miles"

Digit displays a close friendship with the CyberSquad and many minor characters. He has a personal vendetta against Hacker, Buzz, and Delete, and is more suspicious of them[26][27][28] and Wicked[29] than the other members of the CyberSquad. Despite this, Digit sometimes says "The Hacker", which may be a habit from when he worked for Hacker.

He's a bird, he's a plane...no, he's a klutz- but a loveable klutz who's a first class pal to the kids. He used to work for Hacker, but flew the coop when Hacker betrayed Motherboard.

Pet Peeves: Heights and having to do things over

Age: Not that old

Favorite Line: "I knew that... I was just testing you."

You gotta love Digit. He may not always have the right answers,but he always gives 200% for Team Motherboard. Digit is sort of mother hen (er, “cyboid”) to Inez, Jackie and Matt, and he looks after them whenever they’re in cyberspace. He helps Motherboard too, taking care of things for her at Control Central.

Digit is one tough-talking cyberbird. He’s not afraid of Hacker – not usually, anyway. In fact, he was made by Hacker, back when Hacker worked for Motherboard. Digit wouldn’t dream of associating with “that crumb-bum” now.

Digit helps the “Earthlies” (as he fondly calls Inez, Jackie and Matt) figure things out by asking endless questions whenever he doesn’t understand something…which is often. Sometimes he talks about taking a day off, but he wouldn’t miss spending time with his friends or fighting against Hacker for anything.

AGE Not that old! “Hey, what do I look like – Grandma Moses?”

SKILLS He can go over or around things the kids can’t. He can turn his beak into all sorts of mechanical tools to help out in tough situations. Digit is an excellent mimic. He has a hatch in his chest that is filled with just about anything the kids might need to help get them (or himself) out of a jam.

PET PEEVES Heights and having to do things over

Digit, a cyboid, was created by Hacker, but he left him to work for Motherboard. He can fly with his propeller tail, but he is afraid of heights and often crashes and dents his beak. A great friend and helper, Digit loves to work with the kids to stop Hacker. Signature line: “Yoikes!”

Digit has appeared in every episode thus far, except for "The Poddleville Case". 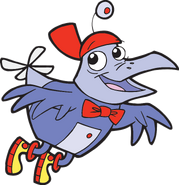 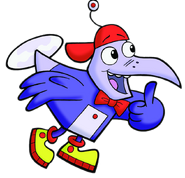 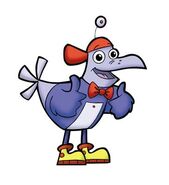 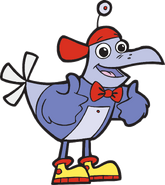 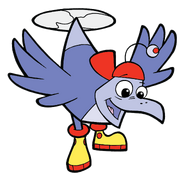 Similar pose to that on the Starlight Night DVD cover 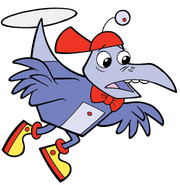 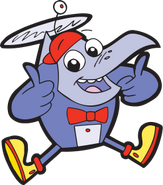 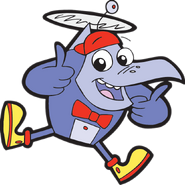 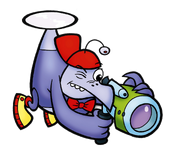 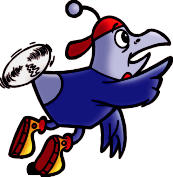 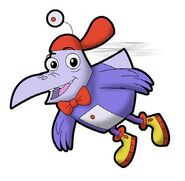 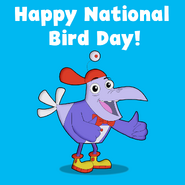