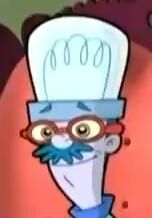 Dr. Marbles is a brilliant inventor who assists Motherboard, and is trying to restore her to her full power. He is always full of ideas and helps out the Cybersquad. In his solo quests to assist Motherboard, he usually doesn't get to finish them because of The Hacker, whom he created as an assistant to Motherboard originally. He is usually called "The Doc" by Digit, due to their partnership and friendship.

Dr. Marbles has lavender skin, a blue mustache and eyebrows, yellow eyes, red glasses, and what appears to be a light bulb for a head that flashes red when there is danger nearby (Clock Like An Egyptian). Dr. Marbles wears a light blue jacket with dark blue at the collar and wrists. His pants are blue, and his boots are black.

His favorite book is Zen and the Art of Motorcycle Maintenance by Robert M. Pirsig and his favorite movie is Tron. He has a love interest in a female computer programmer named Lady Ada Lovelace as shown in "Hugs and Witches".

After Hacker removed the Encryptor Chip from Motherboard, Dr. Marbles had the opportunity to permanently delete him but chose instead to take away his power supply and banish him to the Northern Frontier. Because of this, Hacker needs to regularly recharge himself with his recharger chair. Therefore, it is possible that Hacker hates Dr. Marbles more than anyone else. Some of Hacker's earliest schemes have involved attacking him personally, making him his prisoner, and using him to his advantage such as in "Castleblanca" when he tried to use Marbles' brain power to activate Gigabyte. In "Step by Step", Hacker reminds Dr. Marbles that when he first built him, he gave him brain power equal to his, which is evident as to how Hacker is such a formidable foe towards him. Overall, what started as a seemingly simple relationship, as assumed in the flashback in "A Piece of the Action", has become nothing more than a bitter struggle between creator and creation.

Dr. Marbles with a beard in "The Cyberchase Movie"