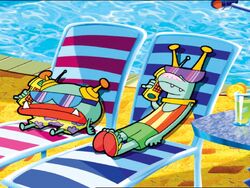 "EcoHaven CSE" is the first episode of Season 3 of Cyberchase. It originally aired on May 3, 2004.

Someone has stolen the legendary cyberbeast Chewcroca from cybersite EcoHaven, and the only clue is the culprit’s footprint.  Using the principles of “body math,” the CyberSquad has to sleuth out who took Chewcroca and rescue the massive beast.  The suspects are members of a safari team – one of them is secretly working for Hacker, who wants to capture the creature and use it to take over Cyberspace.  The CyberSquad must use forensic science to build their case and find both the culprit and the critter before Hacker gets his way.

Retrieved from "https://cyberchase.fandom.com/wiki/EcoHaven_CSE?oldid=25636"
Community content is available under CC-BY-SA unless otherwise noted.