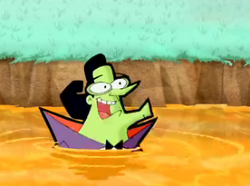 "EcoHaven Ooze" is the fourth episode of Season 5 of Cyberchase. It originally aired on November 29, 2006.

When Hacker discovers that the liquid ooze that feeds the animals of EcoHaven also gives him a super energy boost, he decides to drain the pond and take the ooze home. He builds a fort around the pond, so the CyberSquad must figure out a way to get in without being noticed. They take inspiration from the Greek myth of the Trojan Horse and build a giant “Trojan Ducky.” After testing a model of their invention to be sure it works, they hide inside the duck, and fool Delete into taking them to Hacker. But how will they stop Hacker’s nefarious plot?

Retrieved from "https://cyberchase.fandom.com/wiki/EcoHaven_Ooze?oldid=25545"
Community content is available under CC-BY-SA unless otherwise noted.