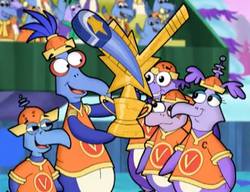 Face-Off is the second episode of Season 8 and of the Cyberchase Summer Challenge.

To compete for the prestigious Penguia Cup, Fluff wants to wear his dad’s lucky hockey skates – but his teammates won’t let him! They’re all going to wear the cool new Cyberblades they saw advertised on TV. To change their minds, Fluff must analyze a sneaky ad and prove the new skates are not the best choice for the big game.

Hacker wants The Power Forever Recharger Chair, a recharger chair he read about in a magazine ad. However, he does not have enough money to buy it after spending too many snelfus on too many failed schemes, so, as advised by his financial advisor, he makes ice skates to get the money.

Meanwhile, Fluff and his teammates are practicing for playing the Tundra Town Titans when Ice, the captain of the team, calls them in and gives them a look at a commercial for Cyberblades, new skates that are unknowingly being made by Hacker. Everyone on the team buys into this except for Fluff, who only wants to wear his dad's skates, since his dad scored the winning goal when he played the Tundra Town Titans wearing these skates. However, this leads to a conflict between him and the rest of his team when Ice threatens to sit him out if he does not wear the Cyberblades. Against her wishes, Fluff leaves the game and heads straight home in anger. At Fluff's house, PJ tries to cheer him up to wear new skates, not his old ones, but only to make up Fluff's mind.

In Fluff's bedroom, Inez and Jackie offers him the pair of Cyberblades in case he needs them. After that, they watch the Cyberblades commercial again and determine what is false and what is true. The commercial claims that you can:

After analyzing the claims, they discover that the only good reason to buy is the money back guarantee-the rest of the claims are all false. The Cyberblades are also proven worse than regular skates when the Voyagers start off the big game with a bad start (they are behind 0-3). After Fluff shows his analyzations, the Voyagers go back to their old skates and, with the help of their hearts, win the big game 4-3. Digit suddenly discovers that the Cyberblades were made in the Northern Frontier

Hacker eventually makes enough money to get the Power Forever recharger chair by selling cyberblades, but soon discovers that wearing wig gel when using it may permanently damage the energy source. Deciding he has had enough, he decides to return it, knowing he has seen a money-back guarantee in the ad. But under the fine print, since he has removed the chair has been removed from his original packaging, so he cant return it. Even worse, the customers of the Cyberblades are complaining about how they really are so he has to come up with the money to pay all of them back.

The Voyagers practice for the big game

The Voyagers celebrate after Fluff scores the winning goal 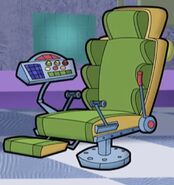