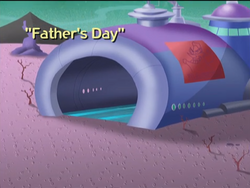 "Father's Day" is the fifth episode of Season 7 of Cyberchase. It originally aired on June 19, 2009.

It’s the annual Father’s Day Parade in Tikiville, and Creech’s father, Max (Matthew Broderick), is this year's Cyberdad of the Year.  Max was once a schoolmate of Hacker’s – and continually bested Hacker in all of their endeavors.  Hacker has decided it's time to get even and this time he’s got a really clever plan… Using secret codes and a band of bad guys, he rolls into action, cleverly changing the code each step of the way to keep those "Earthbrats" from catching on. Will Hacker succeed in spoiling Father's Day and embarrassing Max? Or will our heroes figure out the pattern to his codes in time to stop him?

In his secret room in the Grim Wreaker, Hacker is reading a photo album of when Max always bested him. He bested him in: track, debates, slugball, and even their schools dance contest! But then, Hacker reveals a plan to finally embarrass Max at the Fathers Day parade he is in. He calls for Buzz and Delete to get Baskerville and Trashinator. But Buzz and Delete accidentally text the Cybersquad as well while they are teaching kids in Perfectamundo how to play soccer. Later, Hacker reveals his newest invention — The Decode-A-Tron. It sends coded messages in numbers to the henchmen to keep the Cybersquad from knowing what Hacker is saying. While Hacker is telling his henchmen about it, Digit sneaks aboard the Grim Wreaker and, almost getting found out by Hacker, gets a Decode-A-Tron for his own squad. Then, comes a coded numerical message that reads 7-15 20-15 10-9-11-9-22-9-12-12-5 20-8-5 8-1-3-11-5-18. Unfortunately, the kids can't figure out the code, until they find that the letters are bunched together. Matt also points out that there are no letters over 26, because there are 26 letters in the alphabet. To get organized, Jackie writes them down a table, and they finally are able to decode the message: Go to Tikiville -The Hacker.

At Tikiville, it's time for the annual Father's Day parade, where Max is the Cyberdad of the Year. And cameras are videotaping Creech as part of a TV show. We learn the parade goes through the Sweet Cyberway, the Far-Out forest, and then stops at the Fantastic Fathers Photo-Rama. Then, Max comes onto the show to tell everyone how he won Cyberdad of the year. After that, the Cybersquad portals in. Creech greets them, and Jackie tells them they came to see the parade, but really are wondering what Hacker is up to.

We then cut to the Grand Tiki Statue, where Hacker is inside, with Buzz and Delete being his lookouts for how well the plan goes. Hacker then sends coded messages to Baskerville and Trash, while the parade goes on. When Digit receives the message, he, Matt and Jackie try to figure out what the coded message means.