For the game show, see Find Those Gleamers! (game). 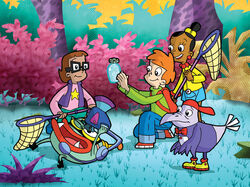 "Find Those Gleamers!" is the fifteenth episode of Season 1 of Cyberchase. It originally aired on February 8, 2002.

The Hacker challenges Jackie, Matt and Inez to a contest on cyber-wide television! In order to prove to all of Cyberspace that Hacker is not as powerful or smart as he seems, the kids return to Topsy-Turvy Island on the Southern Frontier for the contest. Their mission is to power up a Mini-Wreaker using Gleamers of varying power before the island turns inside out at sunset. The kids must use algebraic equations to determine how many Gleamers and how much power they’ll need.

This is the first time where Matt calls Inez "Nezzie".