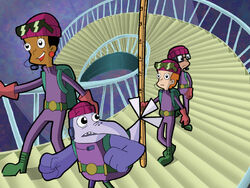 "Fortress of Attitude" is the 23rd episode of Season 1 of Cyberchase. It originally aired on July 5, 2002.

Hacker decides that he can force cybersites to surrender by annoying them big time. He broadcasts his loud and obnoxious voice across the vastness of Cyberspace from a massive statue shaped like the arrogant Hacker himself. The kids and Digit are sent by Motherboard to the Northern Frontier, where they carry out a Mission Impossible-style scheme to silence the statue and disable Hacker’s intimidation. Using their skills at measuring length, the kids make their way up through the inside of the booby-trapped statue to Hacker’s pointy chin and big mouth. But can they shut him up before Hacker shuts them down?