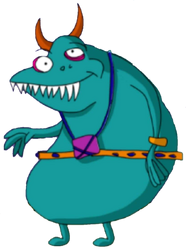 Gigabyte is a robotic monster that Hacker has tried to bring to life. He first appears in "Castleblanca" and is voiced by Robert Tinkler. Gigabyte has also been a playable character in Cyberchase: The Quest.

He is named after the gigabyte, a unit of measurement equal to one billion bytes, which is commonly used to measure digitally stored data.

Hacker tries to use the light of the full moon over Castleblanca to transfer Dr. Marbles' brainpower into Gigabyte. The transfer cable unplugs, and when Delete tries to fix this, the energy grounds through his body. Gigabyte comes to life but has Delete's brain.

While chasing after the CyberSquad and Dr. Marbles, both Hacker and Gigabyte are struck by lightning. Gigabyte topples over, sending himself, Buzz, and Delete through a wall and into a river below.

In "A Perfect Fit", Hacker retrieves Gigabyte's body from the river. Due to the alignment of the sun on Jimaya at noon on a specific day, Hacker has a chance to "reenergize Gigabyte's cyber cellular matrix".

Gigabyte's body must be aligned properly at the top of a pyramid. Out of jealousy, Buzz twice lets go of the rope attached to Gigabyte, dropping his body and causing Gigabyte's left horn to snap off the second time.

At noon, the CyberSquad thwarts Gigabyte's revival by blocking the sunlight. Buzz then catapults Gigabyte's body away.

Gigabyte later appears in "The Halloween Howl", where he is seen trick-or-treating with a mummy.

As of "A Perfect Fit", Buzz is jealous of the way Hacker and Delete treat Gigabyte. He fears that once Gigabyte is revived, the monster will replace him in both his job working for Hacker and his friendship with Delete. Because of this, he recklessly damages Gigabyte's body throughout the episode.

Delete considers Gigabyte an older brother figure due to having his brainpower, and therefore thinking the same way as he does. In a way, Gigabyte is a brother to Delete, since they were both made by Hacker. He has nicknamed Gigabyte "Giggie".[1]