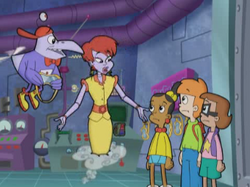 Gone With the Fog is the first episode of Season 7 and the first of a series of weather-related episodes called Weather Watchers.

The CyberSquad is in Gollywood making a movie when Glittertown’s top designer, hairdresser, and make-up artist go missing in a dense and unexpected fog. Turns out Hacker is responsible and has spirited the stylists away to his home base.  Cyberspace’s favorite weathercaster Stormy Gale (Janice Huff) helps the kids discover how to make fog, but to pull off a daring rescue, the kids have to find the elusive dew point at the Northern Frontier on their own. Can they figure it out and make their own fog to get the glam-makers back home safely?

Retrieved from "https://cyberchase.fandom.com/wiki/Gone_With_the_Fog?oldid=22278"
Community content is available under CC-BY-SA unless otherwise noted.