The Grim Wreaker is Hacker's cruiser and primary mode of transportation. It was built by Digit after Hacker's exile. It is typically parked at Hacker's hangar in the Northern Frontier. Its name is a reference to the Grim Reaper.

It is a large black ship with green windows, a telescoping ramp in the underbelly, and a large living space inside. The ship is frequently damaged by Buzz and Delete, the CyberSquad, and occasionally Motherboard herself. In early seasons, it often falls into a state of disrepair with Hacker's schemes being interrupted due to failure to maintain it properly.

The Grim Wreaker is mentioned in the Castilian Spanish version of the Cyberchase Theme Song[1].

The Grim Wreaker can travel at speeds of 100 cybermiles per hour[2]. Although it is unknown whether this is the top speed, it's shown to be able to keep up well with Dr. Marbles' and Digit's cybercoupes.

Its landing gear has a safeguard to prevent outsiders from piloting the ship, which Dr. Marbles is unable to bypass[3]. However, in "The Snelfu Snafu: Part 2", Digit is able to pilot the Wreaker without permission; although given that Buzz and Delete had just exited the ship, it is possible the safeguard had been temporarily disengaged. The Grim Wreaker also seems to have a function of disabling certain unauthorized electronics, as it disabled Digit's Skwak Pad in "A Change of Art", yet it simultaneously failed to disable his ETD (electronic tracking device).

The ship has a variety of tools such as a rope ladder (or a single rope[4]), megaphone, vacuum, grabbing claw, and a hologram projector that displays a replica of the Wreaker[5]. In "A Crinkle in Time", there is a small opening at the top through which a zap-n-snap trap is released. In "Housewarming Party", the ship has a boomerang laser capable of destroying a mountaintop, as well as a benign laser show.

When Dr. Marbles performs a site warp in his cybercoupe in "Castleblanca", the Grim Wreaker is able to follow. This ability contradicts how other episodes portray fast travel between cybersites, and a site warp has not been performed since.

The Grim Wreaker is a large black ship with green, red, and yellow accents. The front of the ship has two rows of green windows that wrap around the sides to halfway back the ship, a set of small circular windows between these rows, and a green dome on the underside of the very front. There are curves above each row of windows that gives the ship a tiered appearance.

The rear half of the Wreaker is more bolted. In "A Renewable Hope", this section has a fuel gauge on the port side. There are multiple cylindrical protrusions along the length of the ship, with red stripes banded around them. At least two of these on each side are engines with fan disks[6], seemingly using a turbofan engine design. The very back of the ship has a yellow ring across its surface that surrounds the rocket burner. The exhaust flame can be warm-colored, or blue[7][8][9].

A prominent entrance and exit on the Grim Wreaker is the telescoping ramp that leads through the underside of the ship's midsection. The ramp and its opening are of inconsistent width. In some episodes, it is about as wide as Hacker's body; in others, there is enough width for the cyberscooter to drive through or a large tree to be dragged across, with room to spare.

The Wreaker has are multiple other entry and exit points that vary depending on the episode. It has an entrance through the green under-dome[3] that includes a light blue ramp[6]. There is also a side entrance[10] that releases a narrow ramp to the opposite side of the control room. "Zeus on the Loose" and "Size Me Up" use a green light that beams people up to the Wreaker.

In "A Crinkle in Time", the ship is damaged by a zap-n-snap trap and the frame underneath the outer shell becomes visible.

In most episodes, the green under dome of the Wreaker is able to rotate open. Inside the dome are various tools, most notably a grabbing claw Hacker has used on smaller ships as well as people. However sometimes these tools have been shown to be released through other places such as the midsection of the ship or the top.

The interior ship has a few inconsistencies as well. In "Lost My Marbles", the CyberSquad and Marbles enter through the green under dome, finding a room with a platform from which Hacker had earlier released the pink smoke, and a runway where Marbles's cybercoupe was being stored. This area of the ship is only seen again in "And They Counted Happily Ever After" and seems to spatially contradict areas shown in future episodes.

In "Past Perfect Prediction", the top of the midsection ramp, which is the most common method used for exiting and entering the Wreaker, is shown. It seems to be an area used for storing garbage cans while onboard. Though the area seems rather small, in previous episodes, Buzz and Delete were able to carry a large tree[11] and a statue of Hacker inside[2]. There also seems to be an area for storing the cyberscooter and sidecar that Hacker recurrently uses.

The main body of the Wreaker is a maze of hallways and corridors. Known rooms include Hacker's bedroom, his personal lab, his trophy room, the kitchen, the gym and the main control room.

Hacker's lab appears to be passcode protected with a heavy door and a sign prohibiting Buzz and Delete from entry. It initially opens with a handle, but it slides open as of "Father's Day". The room inside is longer than it is wide and has a curtained-off area at the far end. Hacker seems to have managed to keep the electric eel tank and pedestal to the Prism of Penguia after "On the Line"[12].

Hacker's trophy room appears in "Starlight Night" when he shows it off to Professor Archimedes. There are various portraits of himself inside, as well as various knick-knacks, some of which resemble trophies. On display is a miniature of Hacker's scheme in "The Guilty Party" where he set up an energy-siphoning statue in Poddleville.

It is unknown whether the gym room is a typical room on the Wreaker or if Hacker set it up specifically for the video he filmed in "Harriet Hippo & the Mean Green", as it does not reappear afterwards. Hacker is shown lifting weights filled with air; whether he possesses real ones is unknown.

The kitchen also only appears on one occasion. The freezer is show to only contain ice cream and wig gel.

The control room of the Wreaker is accessed through a door at the far right side of the room. It can apparently also be accessed through a transport tube, though it is not shown where the tube leads. In "Double Trouble", the tube is instead used to trap Master Pi, but it is never used in this way in other episodes. There are monitors stacked across the back walls and on various switches and controls on either side and up front.

The placement of windows in the control room varies between episodes, as the round windows may either be drawn closer to the ceiling of the room[13] or at eye level[14]. In "The Grapes Of Plath", there are large rectangular windows on at least one side of the room that are not present in other episodes. In some episodes, the room itself is modified to fit shot composition and various elements are either rearranged or removed. It is unclear whether these areas are still meant to be part of the control room or different rooms altogether. This is most notable in "A Time To Cook", where there appears to be a circular, enclosed area from which the control panel of the Wreaker is not visible.

Depending on the episode, there are various pieces of equipment and furniture inside the control room, from a force field device to a squeeval incubator. Most often, the space is occupied by a table and bench set.

At the front of the control room is a dashboard to pilot the Wreaker and a large monitor that spans the height of the wall. By default, the monitor appears to show a map of Cyberspace[11]; it can change to function as a window, or display images from across Cyberspace and even the real world[3]. At the dashboard is Hacker's Recharger Chair which seems to be able to move to anywhere in the room. In the early seasons, the chair appears to be attached to the floor, but in Flash-animated episodes, it is redesigned to look as if it is hovering. The chair itself seems to be controlled by a device attached to the armrest, although in "Sensible Flats" there is a lever Buzz and Delete pull to recharge their boss.

The Wreaker is piloted through several different control mechanisms throughout the series. The most common is a joystick attached to the Recharger Chair. Alternate methods include two joysticks on the dashboard[3], a steering wheel on the dashboard[15], and a gesture-based steering system[16].

A minor inconsistency occurs in "Less Than Zero", where the area usually occupied by the large monitor is depicted as a window, possibly corresponding to the large rectangular windows shown in exterior shots.

There is a trapdoor in the control room, activated with a pull rope, that leads to a dungeon somewhere in the lower levels of the ship. According to Digit, it was common for Buzz and Delete to accidentally trap themselves in the dungeon, so the room's key and doorknob are kept under the welcome mat.[11] This may have changed by "The Snelfu Snafu: Part 2", as Dr. Marbles and the CyberSquad instead escape through a garbage chute in the wall.

In "Secrets of Symmetria", the Wreaker appears to have a viewing area that corresponds to the upper rectangular windows shown in exterior shots. This seems to be the most consistent with continuity, as multiple episodes portray the main control room as occupying the space below these windows. However, this space does not seem to appear in other episodes.

The Grim Wreaker is Hacker’s ship, his home, his pride and joy. It’s got everything he needs to wreak havoc on the cyber universe.

This article or section is incomplete: "Needs a list of episodes"
Please add information to improve its coverage and accuracy.

The Grim Wreaker appears in nearly every episode, with some exceptions including "R-Fair City", "The Wedding Scammer", "A Perfect Fit", and "Balancing Act". Sometimes only the inside of the ship appears, as in "Hugs & Witches".

"Who's Who Document". Based on the design from "The Poddleville Case"; note the two rows of green windows at the bottom.

The Wreaker over Radopolis in "The Borg of the Ring" 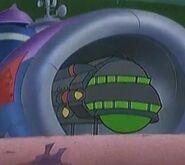