Hacker, (also known as "The Hacker") is the main antagonist of Cyberchase. He is the Cybersquad's arch-nemesis who plans to take over all of Cyberspace. He is supported by Buzz, Delete, and on occasion, Wicked. Hacker is known for his hair supported by wig gel, a pointy chin, and a very conceited and discourteous personality. His favorite color is puce.

Hacker began as a creation of Dr. Marbles. He was created to work for Motherboard, and did so for an undetermined amount of time. Hacker eventually created Digit to assist him. During this time, he also worked alongside Coop, Slider's father. At one point, Hacker decided that he wanted to be the one to rule Cyberspace. When he reveals that he wanted to use an invention they created together called the Transformatron as a way to take it over, Coop tore apart the blueprints and discarded them.

Hacker promised he would get his revenge on him, and has succeeded by switching his helmet with another one made out of magnetite. The time warping effects of it caused Coop to leave Slider.

Eventually, Hacker removed Motherboard's Encryptor Chip, Digit returned it, and Motherboard banished him when he was caught. Dr. Marbles drained his power from him (which explains why Hacker must use a recharger chair and his unending hate for Marbles). Despite the kick-out, Hacker took Digit with him. When they found themselves at the Northern Frontier, Hacker had Digit build the Grim Wreaker. When Hacker began creating chaos by causing blackouts to cybersites, Digit restored the power to those who were affected, and an angered Hacker imprisoned him. Digit used the key function in his beak to break free and return to Control Central, where he was welcomed warmly with opened arms.

Shortly after his rebuild, Hacker launched a plan to get revenge on Motherboard. He programmed a library computer in the real world to crash, which would allow him to breach the system. When this happened, Hacker sent a nasty computer virus to Motherboard while she was undergoing an upgrade. Unfortunately for Motherboard, Dr. Marbles wasn't able to close her up in time. The virus invaded Motherboards circuits, but the damage was only partial. A prominent fact stated throughout the early seasons is that Motherboard's Encryptor Chip will be able to cure the damage, which causes the chip to be a usual target for both the Cybersquad and Hacker.

Hacker is conceited (calling himself THE Hacker), manipulative, sadistic, cynical, vain, and has what has been described as a planet-sized ego. When he does not get what he wants, he will go to the extremes to get it, and sometimes, he'll try to work hard to get at his goal. One instance is seen when he enrolls in wizard school and tries to work hard so that he can become the strongest wizard in Cyberspace. Another instance was when he used a device (voiced by John Larkin) to lure cyborgs into allowing Hacker to take over Cyberspace.

Throughout the series, Hacker has suffered strong cases of arachnophobia "fear of spiders," and plasmophobia "fear of ghosts." His plasmophobic nature has been known to work against him in some of his schemes, such as when Digit used an inflatable balloon of Ivanka the pirate ghost to scare Hacker away from EcoHaven.

Because of Hacker's obnoxious attitude and arrogance, he does not have anyone he would consider a friend, and is hated by almost everyone in Cyberspace, which does not bother him. Most of those who have associated themselves with him are just there to work for him. Usually it's Buzz and Delete doing most of his work, though Wicked would sometimes lend a hand (for her own benefit usually). Some of the cyborgs who have done things for him include:

When Hacker was younger, he liked working for alongside with his "father", Dr. Marbles for Motherboard ("his mother"), but after he decided to take over Cyberspace for his own personal benefit, he made himself an enemy of them. Motherboard has a deep, strong dislike for Hacker because of his betrayal. In the episode, Trick or Treat, when Hacker comes to Control Central to asks for forgiveness (which was a lie), Motherboard almost immediately rejects him and makes it clear that he could never be welcomed there. While Motherboard has a strong dislike for Hacker, Dr. Marbles hates Hacker to no end. In a flashback in the episode, A Day at the Spa, it is revealed that even though Dr. Marbles could have deleted him after his betrayal, he chose instead to drain his power supply and banish him to the Northern Frontier. Because of his loss of power, Hacker has developed a strong hatred for him, likewise. It has come to the point that Hacker has used Marbles for many of his early schemes from the first three seasons. After Hacker took over Cyberspace in season three, Dr. Marbles had to destroy the Encryptor Chip in order to defeat him, he went into hiding to find an alternative to destroying Hacker's virus. After not being heard from or even mentioned in seasons 4 and 5, Hacker finally found him in season 6 (Step by Step) and tried to use Marbles' discovery of the Magmulux, against him and Motherboard. An interesting point made here is that when Marbles created Hacker, he gave him brain power equal to his, a decision Marbles had come to regret.

Hacker is very firm and demanding to his henchmen most of the time. Even though Buzz and Delete try, he is always angry and talks down to them, even if it wasn't them who made the mistake. Whenever he is soft-hearted with them, it is usually for his own benefit and just an attempt to get Buzz and Delete on his side. He usually yells "you duncebuckets!" or "half-brained, bucket of bolts!" when he is displeased and frustrated with them.

Hacker loathes Jackie, Matt, Inez, Digit, and Slider as much as Motherboard and Marbles, but he usually acts more calm and clever with them than with Buzz and Delete. Sometimes he would speak sweetly, usually to pretend that he's gone good, or to tease them, such as in the episode, Totally Rad, where he taunts Inez, to the point where she puts herself at risk. However there have been many instances when he would call them "Earth brats" (he uses this term the most), "goody-goody gang" and "terrestrial termites". Out of the whole Cybersquad, Hacker seems to hate Digit the most. This is unsurprising due to Digit's past and experiences with him. Before Digit turned back to Motherboard, Digit saw Hacker's spread of chaos in Cyberspace and knew that he was in the wrong. When he saw Hacker cause blackouts in Cyberspace, Digit repaired them, causing an enraged Hacker to imprison him. Since Digit's escape and return to Motherboard and Dr. Marbles, Hacker has felt deep hatred for him and has targeted him a few times. In the episode "Digit's B-Day Surprise", Hacker shows him an album of his early days, as a way to reprogram Digit to make him loyal. Digit eventually realized that Hacker was just lying to him and, like in both the earlier and later episodes, just continues to resent him.

Wicked and Hacker have a very difficult relationship. Throughout seasons 2 and 3, they would often work together to destroy Motherboard, all of which have ended badly. Meaning that, throughout season 2, when a plan would fail, it mostly ends with the the two usually having a quick argument and would end with Wicked casting some sort of spell on him, whether it was a change in size or attitude. In season 3, when Wicked jumped at the opportunity to become co-ruler of Cyberspace with Hacker, he initially rejected her, which prompted Wicked to use extreme measures to convince him, a plan that works. After Wicked overdoes Control Central's new look and overspends Hacker's money once she is finally in power, Hacker kicks her out, leaving an angry hate-filled Wicked to inform Digit, the kids, and Slider that Hacker was going to discard Motherboard into a black hole. Most of the episodes involving their relationship after season 3 have been either trying to make Wicked jealous, trying to impress her, or trying to upstage her. Wicked is aware of all of these things and will either take advantage of the situation, or she will let him know that she is not interested and wants nothing to do with him. Whenever she beats him at anything, she will not refrain from bragging.

Since Hacker needs to take over cyberspace, there are many gadgets that he must use in order to fulfill his duties.

The following are gadgets that he has made; however, not all of them worked accordingly. 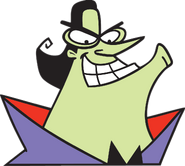 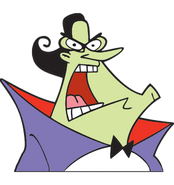 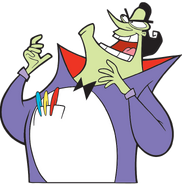 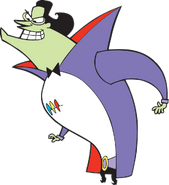 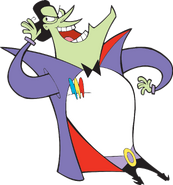 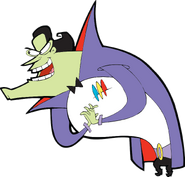 Add a photo to this gallery
Retrieved from "https://cyberchase.fandom.com/wiki/Hacker?oldid=20415"
Community content is available under CC-BY-SA unless otherwise noted.