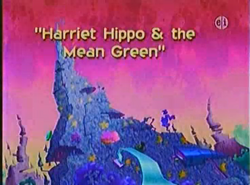 "Harriet Hippo & the Mean Green" is a third episode of Season 2 of Cyberchase. It first aired on April 1, 2003.

Hacker infects Motherboard with a new virus — one that causes her to make cyber-citizens act mean. Digit and the kids go in search of an antidote: 2/5 of the Electro-Root, 2/8 of the Healing Stone, and 1/3 of a box of Hacker’s wig gel — a strange antidote indeed!  Will the young cyber-heroes be able to gather the ingredients and figure out how to properly mix these odd fractions? And will said amounts really be good enough?

Retrieved from "https://cyberchase.fandom.com/wiki/Harriet_Hippo_%26_the_Mean_Green?oldid=23338"
Community content is available under CC-BY-SA unless otherwise noted.