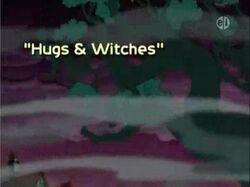 "Hugs and Witches" is the first episode of Season 2 of Cyberchase. It originally aired on February 14, 2003.

It’s Valentine’s Day, and Hacker captures Dr. Marbles and Lady Ada Lovelace, placing them inside the time machine invented by the mathematically-minded Lovelace. The Cybersquad must decipher a series of poems left behind by Lady L and free them from the time machine before it time travels to the nether world of Cyberspace — never to return!  Will the kids get there in time, or will Valentine’s Day bring nothing but broken hearts?

Dr. Marbles is on a stroll with a lady named Lady Ada Lovelace, (Lady L.) when suddenly, Hacker appears and capture them. He then puts them inside a time machine that Lady L. built and sets a timer to 30 minutes before they're transported to pre-historic times forever. The doc and Lady L. were tied up so they can't deactivate the machine. Hacker then leaves Buzz and Delete to guard the captives to make sure the Cybersquad doesn't rescue them.

Meanwhile at Inez's house, Inez and Jackie are making a Valentine for Motherboard, while Matt, who doesn't like Valentine's day, just plays with his yo-yo, when Motherboard appears and tells the squad about the doc and Lady L. The kids then teleport to Cyberspace, meet up with Digit, and then search for Dr. Marbles and Lady L.

Back at the time machine, Dr. Marbles and Lady L. forget about the timer and talk about events from the past, which kind of grosses Buzz and Delete out.

Along the way, the squad helps out a gnome who needed to make piles of rocks with each pile having the same amount, give fresh baked cookies to some trolls to cross a bridge, and figure out which joker from a group of jokers is of the median height.

When they finally get to the time machine, they sneak around back to avoid Buzz and Delete. Lady L. then gives them the code to stop the countdown. They stop it with one minute to spare and free the doc and Lady L. But Buzz and Delete notice them and chase after them. But the Cybersquad tricks the two bots to go into the time machine and the kids send them to pre-historic times. Dr. Marbles and Lady L. thank the kids for saving them and they return home, while Buzz and Delete get attacked by a dinosaur.

Back at home, Inez finds a couple of Valentine's on the ground. Matt tries to grab them from her but Inez tosses them to Jackie who reads them. The girls thought Matt was really sweet. Then they both kiss him on either cheek making Matt blush and say "Aw man."

Jackie: How about vermillion?

Matt: It's a girl thing.

Digit: I knew that.

I never noticed that the goat licked you because he likes you.

And Digit going back to the portal. (Note: Maybe Didge has to go to Beaks Galore, again.)

Whoa,that was a nice move!

Jackie: (still reading the Valentine, off screen) A guy couldn't have more friends than you.

Inez: "And we thought you hated Valentine's Day!"

The girls began to lean forward...