Inez (nicknamed "Nezzie" by Matt) is one of the three main protagonists of Cyberchase, and the youngest of the four main members of the CyberSquad alongside Jackie, Matt, and Digit.

She is a nine-year-old Latina who lives in a city apartment on Earth. She is an avid reader and quoter with a wide bilingual vocabulary, and she doesn't like being wrong.[4]

Inez is usually voiced by Annick Obonsawin, and occasionally by Tasha Currie.

Inez has light tan skin and shoulder-length brown hair with bangs and a flip. She wears a pink long-sleeve shirt with a picture of a large yellow star on it, a pair of black square glasses, a purple hooded vest, teal shorts and high blue boots. When the atmosphere is humid, her hair gets longer and frizzes up.

In "A Recipe For Chaos" and "Plantasaurus!", Inez is shown wearing her pink pajamas and purple slippers.

Inez takes off her glasses in "The Guilty Party", "The Cyberchase Movie", and "Coral Grief", revealing that she has beady eyes with no visible sclerae.

In some episodes of Season 1, such as "Find Those Gleamers!" and "Codename: Icky", Inez's shorts are colored green instead of teal. This seems to be a recurring animation error.

Inez has a pet cat named Gatito. In "On the Line", it is mentioned that she used to have a pet hamster. She is known to be a good fowl-shooter as seen in "Snow Day to be Exact", a good navigator, and a good rollerskater in "Totally Rad". She likes to read books and writes a diary in her bedroom as shown in "The Halloween Howl." She wore a yellow deerstalker cap in "The Guilty Party".

Inez is a very selfless person and is known to be very discreet and exact, as seen in "Snow Day To Be Exact," where she did not prefer estimation. She is also known to be a bit bashful. She likes to stand on her head when she needs to ponder a situation, and doesn't always agree to what her friends think they should do. She usually doesn't give up, and tries to encourage her friends to keep trying and to not let Hacker pull them down. When things seem to be bad, she usually says: "This is not good! This is not good at all!" Despite the fact the she is the youngest and smallest, she is very feisty and knowledgeable.

Inez's favorite foods are mangoes and popcorn, her favorite book is called By the Shores of Silver Lake by Laura Ingalls Wilder. Her favorite music artist is Marc Anthony. Her most commonly known pet peeve is when Matt calls her Nezzie, but does not mind it when he is flirting with her. When he isn't flirting with her, she normally says "Don't call me Nezzie, ANYMORE!" Of course, she has no problem with Slider doing so. She also doesn't like it when there's bad sportsmanship in the group. She is acrophobic (fearful of heights; though she has since gotten over it during the events of The Cyberchase Movie),[5] chiroptophobic (fearful of bats), and is sometimes hesitant to try new things. She can even get angry when Jackie is difficult to work with, like when she won't go through a challenge because of one of her fears.

Inez and Jackie have a pretty good friendly relationship in general, since they are girls and have similar interests in math, the arts, justice, and the environment-especially involving care for animals. Because both of them seem to have a crush on Slider, they would sometimes debate on which one of them should go with him when they split up in small groups to help Motherboard. They had also temporarily disliked each other in "The Halloween Howl," because Jackie thought that Inez considered her mean after briefly reading her diary. Realizing the misconception at the end, Inez actually meant to say that Jackie is meaningful, not "mean."

Despite the fact that Matt calls her "Nezzie" and that he sometimes teases her good vocabulary, Inez still appreciates him and treats him the same good way she treats Jackie and Digit. She does, however, seem to have a more of a problem when Matt calls her "Nezzie" than when Digit or Slider do. She is uneasy when speaking with him when it comes to talking about Slider. She doesn't always understand the way he is, such as in "A Whale of a Tale" (when Matt jumps into a steaming pit because he believed it was only 1 meter long), but she does show that she may have an inner fondness to him. It seems that maybe both Matt and Inez like each other. She seems to be attracted to his athleticism and problem solving knowledge. It is also shown that Matt can be quite protective of her at times. She has shown signs that she has a big crush on him, for example, she tends to turn to him for support and comfort in episodes when she is in peril, is very jealous that Shari Spotter likes Matt and he doesn't dismiss her feelings toward him, and that she tries to be as emotionally close to him. She has kissed him once on the cheek when she heard a valentine written by Matt where she felt loved. However, she may love him as a friend or as a brother.

Inez and Digit have a pretty good relationship in the show. She calls him "Didge," likely showing the affection out of being an underdog as well. Inez is also the most maternal member of the squad, so she treats Digit's slip-ups with concern. Inez does not like it any better when Digit calls her "Nezzie" than when Matt does it, as shown in part 1 of the movie and in the solar episode.

Both Inez and Jackie are shown to have crushes on Slider. In "The Snelfu Snafu: Part 2," he calls her Nezzie and she does not get upset because, as she explains to Matt, "He's... different." Another example of this affection is shown in "Borg of the Ring," Inez and Jackie both call him "cute," and later Jackie says he's "kind of the strong silent type." However, they haven’t known him forever and it is more of a puppy crush.

9 years old: A little girl with a big vocabulary- curious about all kinds of stuff like why do you park a car in the driveway and drive on a road called a parkway??

Favorite Book: “By the Shores of Silver Lake,” by Laura Ingalls Wilder

Great At: Basketball, reading, standing up for herself, singing

The youngest of the three Earth kids, Inez is also the feistiest. She’s friendly, intelligent and a bit of a tomboy. Just don’t call her little! She’s small, but she’s spunky. An avid reader, Inez has a broad vocabulary in both English and Spanish. She loves to use big words – she isn’t trying to show off, it’s just the way she is.

A natural skeptic, Inez doesn’t take things at face value. She doesn’t mind asking questions and she doesn’t like being wrong. Inez likes to think things through too, often puzzling them out while balanced on her head, sitting upside-down with her legs crossed.

She loves to giggle and to quote – her family, famous people, herself! When confronting Hacker and other baddies, Inez stays calm and focused. But she’s been known to holler too, especially when being chased by wild cybergorillas!

BACKGROUND A 9 year old Latina, she lives a city apartment

Inez, age 9, lives in an apartment when she’s not in cyberspace. She loves animals, reads a lot, and has a large vocabulary so she seems older than she is. Inez thinks through problems while standing on her head. Signature line: “This is not good. This is not good at all!” 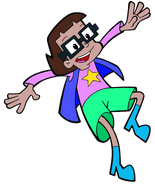