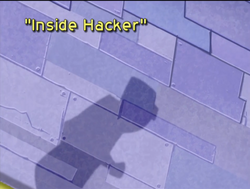 Original air date
April 18, 2007
Directed by
Jason Groh
Written by
Adam Rudman George Arthur Bloom
Topic
Unknown
Previous
"Crystal Clear"
Next
"On the Line"
Inside Hacker is the eighth episode of the fifth season of Cyberchase. It originally aired on April 18, 2007.

It’s the CyberSquad’s most ingenious plan ever – and most dangerous! If they can insert a new memory chip into Hacker’s H-Drive, they can turn him from evil to good. Once he's been shrunk and is inside Hacker, Matt’s mission goes like clockwork until a force field is activated and envelops the H-Drive. All seems lost until Digit remembers a robot that Dr Marbles made that can break through any force field. They can shrink it down and send it in to help Matt...but must first figure out how to make it follow their commands. Can Inez, Jackie and Digit program the robot in time?

"Inside Hacker" Title Card
Add a photo to this gallery
Retrieved from "https://cyberchase.fandom.com/wiki/Inside_Hacker?oldid=23038"
Community content is available under CC-BY-SA unless otherwise noted.