"Invasion of the Funky Flower" is the seventh episode of Season 11 of Cyberchase.

There is a gardening contest in Gardenia, and the CyberSquad is participating. Matt grew a Tutulip, Inez grew a Happiolus, and Jackie grew a Dizzy Daisy. Jackie is dismayed when her Dizzy Daisy can't do anything, saying that she doesn't have a green thumb.

The competition starts and Hacker arrives with his Doofydil. When Hacker doesn't win the award for Tallest Flower in Cyberspace, he is furious. He goes to Jungolia and retrieves the Funky Flower. He planned to introduce the Funky Flower to Gardenia as an invasive species.

An invasive species is a species not native to an area that can affect the area's ecosystem negatively. They can affect the ecosystem negatively by taking all the nutrients and food, drinking all the water, blocking sunlight from other species, and crowding out the other species by taking all the free space. He sets Buzz and Delete to distract the guards to plant to Funky Flower in Gardenia. Hacker, Buzz, and Delete leave Gardenia before anyone notices what they did.

The CyberSquad sees the Funky Flower rapidly multiplying and negatively impacting Gardenia's ecosystem by making all the other plants wilt. They attempt to remove it by pulling it out of the ground like a weed, building a wall, and trying to destroy its roots. All attempts fail. They couldn't pull it out of the ground because of its thick roots, the flowers released seeds into the air that bypassed the wall, and the roots are unyielding. All hope seems lost as Queen Mum's health drains.

Jackie suddenly has an idea and takes a portal to Jungolia. She returns with the Funky Flower Beetles, a species that keeps the Funky Flower population in check in Jungolia. The Funky Flowers are quickly consumed by the beetles, and they were returned to Jungolia by Motherboard's portal. Everything is back to normal in Gardenia, and Jackie is awarded the highest award of Gardenia: the Green Thumb. The episode ends with Jackie saying that she does have a green thumb after all.

The Funky Flower in its natural environment in Jungolia

A swarm of Funky Flower Beetles

Hacker's arrival to the Gardenia contest 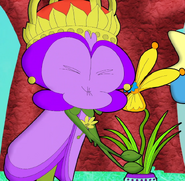 Retrieved from "https://cyberchase.fandom.com/wiki/Invasion_of_the_Funky_Flower?oldid=27096"
Community content is available under CC-BY-SA unless otherwise noted.