Jackie (nicknamed "Jax", full first name possibly Jacqueline[3]) is one of the three main protagonists of Cyberchase, and one of the four main members of the CyberSquad alongside Inez, Matt, and Digit.

She is an 11-year-old African-American girl who lives in a suburban house on Earth.[4] She likes to be neat and organized, and to approach problems in her own way[5], which often helps the CyberSquad solve their problems faster.

Jackie is usually voiced by Novie Edwards, and occasionally by Rochelle Stultz.

Jackie is known to be melodramatic at times, resulting in Matt making fun of her. It is always a requirement for her to create a plan before she and the Cybersquad could began a quest or try something new. She paces when she needs to think carefully. She can be very soft and cute when it comes to meeting little or young cyborgs, such as Poddling No.1 (or Annie), in which she became good friends with in "The Poddleville Case". She has a big dislike for insects and bugs, or anything else messy or gross she comes across. One of her most prominent phrases to say is "Ew, ew, and double ew!" when she's around those more things. She also freaks out when she and her friends are in a crisis, though this decreases in later seasons.

Jackie seems to like coining and using acronyms, even though she has to explain them afterward. Examples include TOT (trick or treat) in "Castleblanca", HTH (hope this helps) in "Secrets of Symmetria", DBP (designated bunny place) and BBP (blue bunny place) in "Of All The Luck", and ETS (exactly to scale) in "Size Me Up".

She loves running races, gymnastics, Double Dutch, skipping, drawing, and writing plays about herself. Her favorite movie is Shrek, she loves the music of Destiny's Child and *NSYNC, her favorite food is tofu burgers, and loves the book Walk Two Moons by Sharon Creech.[6][7] Jackie also likes pirates, and even pretends to be one named Jumpin' Jax. Jackie also is a lover of the environment, like Inez. She may have become vegetarian due to that fondness for preserving life.[citation needed]

Jackie has a rock collection that includes a piece of quartz.[8]

According to Slider in "Team Spirit", Jackie doesn't like to swim, but she says she has taken lessons prior to the events of the episode.

Jackie has a mother who she loves really much. Throughout "Mother's Day", Jackie frets about getting her a gift. Jackie's mother appears at the end of the episode, but only her arms and voice are shown.

Jackie also has a pet dog, as mentioned in her "Meet the Cybersquad" bio and in "The Emperor has Snow Clothes".

Jackie has brown skin, black eyes and curly black hair that she ties into a bun (in the original design, she tied her hair into pigtails). She generally wears a yellow long-sleeved sweater (with a matching scrunchie), a light blue denim skirt, an red bangle on her right wrist, and purple-white high-tops. She also wears a red beaded necklace and red earrings. In cold snowy places (such as Penguia), she wears a winter coat. The first version of the coat is green. In later episodes, the coat's colour changed to pink and purple, and she also now wears purple earmuffs.

Like other characters, Jackie appears in different clothing for some reason. It generally depends on where or what she is doing. Like in "A Perfect Score," she wore island get-up complete with a Hawaiian shirt and a sarong and in "Past Perfect Prediction," she wore a mechanics suit.

11 years old: She's smart, funny, and she's got a plan- O.K., so sometimes she's just a bit over-the-top, but she's on a mission to save the future of the cyberworld!

Pet Peeves: Bugs and anything messy

Jackie is a natural-born organizer. She’s smart, poised and charming. She’s also quite stylish – Jackie never goes anywhere without her signature red jewelry. Jackie has a big heart, and she’s also filled with big ideas and big plans. Don’t get on her bad side though, because she speaks her mind and doesn’t mince words.

Sometimes Jackie freaks out just a little bit, if it looks like things aren’t going well. And she really doesn’t like trolls and giant amphibians. But when there’s a problem to tackle, Jackie jumps in and talks it out to find a solution. A good listener, Jackie is quick to pick up clues.

Jackie’s got a sly sense of humor, and loves adventure. One of her favorite experiences in cyberspace was meeting a real pirate – the spooky cyberghost Ivanka the Invincible.

BACKGROUND An 11 year old African-American, she lives in a suburban house

SKILLS Jackie is very agile and limber. She’s a great gymnast and an excellent artist, often using her ability to draw to help problem solve. Like the others, she is computer savvy and loves to instant message.

PET PEEVES Bugs and anything messy

Jackie, age 11, lives in a house when she’s not in cyberspace. A drama queen, she paces while thinking through problems. She makes diagrams, charts, graphs and draws pictures. She loves fashion and is a good artist. Signature line: “Make room – I gotta pace!” 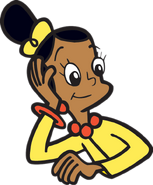