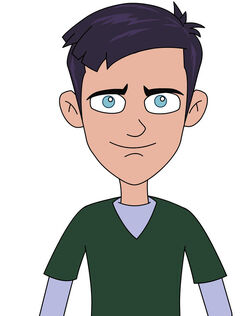 Ledge is a character from Cyberchase. He made his first debut in the episode "Hackerized!", where he was the true mastermind for the Hackerization in Sensible Flats.

Ledge is a tall boy with peach skin, blue eyes, and dark purple hair. He wears a dark green short-sleeved shirt with a bright lavender-colored long-sleeved shirt underneath. He wears blue jeans with red-and-white sneakers, similar to Matt's sneakers.

Ledge used deception in an attempt to separate the Cybersquad and ultimately get rid of them. This was done by creating a false friendship with the Cybersquad and eliminating each member one by one. With that, he planned to be praised by Hacker and have them to work together and he almost took Inez's friends away from her by having them Hackerized. He nearly succeeded in doing so until he was foiled by Inez's successful tactics in disabling the machine within the 3-minute limit. After Inez defeated him, Hacker promptly rejected him.

Ledge reappears in "The Bluebird of Zappiness", where he hunted for the Bluebird with the use of a listening device he placed on Hacker, though to no avail and vowing to return after his second defeat.

Despite appearing in only two episodes thus far, he may be the Cybersquad's most dangerous foe. Unlike Hacker, Ledge thinks through his plans more, has done more damage than Hacker to the Cybersquad themselves, successfully Hackerizing Digit, Matt, and Jackie in that order, and causing Inez and Hacker (and most likely the rest of the Cybersquad) to develop a grudge against him. His worst trait however, may be his vast knowledge combined with all of his previous traits. He has outsmarted Hacker and almost outsmarted kids. However, they know what he did so it will be harder for him.

"Hackerized!"
Add a photo to this gallery
Retrieved from "https://cyberchase.fandom.com/wiki/Ledge?oldid=25834"
Community content is available under CC-BY-SA unless otherwise noted.