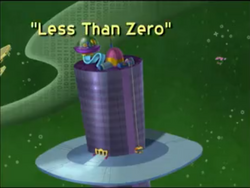 "Less Than Zero" is the 21st episode of the first season of Cyberchase. It originally aired on July 3, 2002.

The Leaders of Cyberspace have gathered to discuss Hacker's increasing influence when they are suddenly interrupted by Hacker.  Buzz and Delete, Hacker's henchmen, hide the leaders, including Dr. Marbles, in the building, and it's up to the kids to rescue them.  Before long, the kids discover that they can only move between the building's levels by scaling its outside walls!  So the kids turn the building into a giant ruler in order to keep track of the floors.  When they discover that there are levels beneath what they thought was “zero,” the kids must tap into the power of negative numbers. 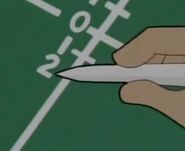