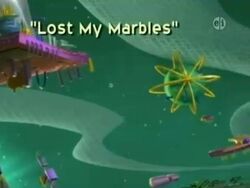 A day at the library turns into a cyberventure when Jackie, Matt, and Inez learn that Hacker has kidnapped Dr. Marbles, the only person who can save Motherboard from an evil virus! The team learns to use a map as a mathematical tool as they navigate across a cyber island in search of Marbles — then try to escape before a huge earthquake turns the island inside out!

Retrieved from "https://cyberchase.fandom.com/wiki/Lost_My_Marbles?oldid=23289"
Community content is available under CC-BY-SA unless otherwise noted.